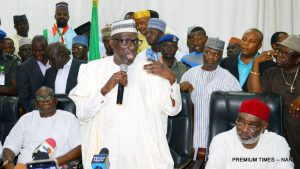 They said this while speaking at the official declaration to contest the position of the chairman of the PDP by Tunde Adeniran, a former minister of education at the Musa Yar’Adua centre, Abuja.

The duo said for the party to clinch power in 2019, it must parade a set of national officers who must be men and women of proven integrity.

Mr. Waziri called on party members and supporters to work industriously for the task ahead because according to him, “the government in power would not relinquish power easily.”

On her part, Mrs. Maina said, “PDP needs to get it right with the next national convention. We must reject imposition in whatever guise.”

“The road to power in 2019 could be very fierce and tedious. We need fighters who will not give up easily. We need people of honour and integrity to lead us.”

Also at the occasion, a former Deputy President of the Senate, Ibrahim Mantu, pronounced himself a ”born-again” politician.

He said whatever he now says is the truth, adding that ”people should believe him.”

He said he had fasted for 30 days during which he said God told him that the party must pick Mr. Adeniran as its chairman.

“I’m now born again; whatever I say now is the truth. Some people came to the PDP with nothing and left with billions. We need to bring the party to the people now. We need to be sober and apologise for what we have done wrong in the past.”

“I fasted for 30 days and 30 nights, asking God to show me who would lead the party. God showed me Adeniran. Let’s now look forward and make sure that we elect a credible chairman.

“We should make sure that nobody short-changes us at the national convention.”

His statement ignited laughter amongst the delegates.

Mr. Adeniran who is running for the PDP chairmanship said the December 9 convention is an opportunity for PDP to bounce back to power.

While soliciting massive support across the six-geo-political zones, Mr. Adeniran, a former ambassador to Germany, promised to work tirelessly to “reaffirm and entrench the founding principles of our great party; restore the sanctity of internal democracy and the rule of law and return the party to the people in tandem with the spirit and intent of its slogan.”

Others who have shown interest in becoming the PDP national chairman are a former deputy chairman of the party, Bode George, and a former Ogun State governor, Gbenga Daniel.