Home News Feed 65-year-old Virgin Participates In Annual Reed Dance | Photo
Facebook
Twitter
WhatsApp
A 65-year-old virgin has revealed her excitement after she was cleared to participate in the annual reed dance in South Africa. 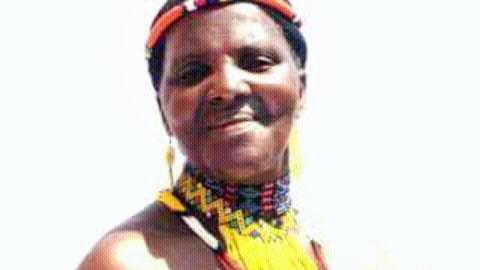 Ngipheni Ngcobo may be one of the oldest virgins at the age of 65, but every year in September, she gets excited as she prepares her traditional attire to attend the uMkhosi woMhlanga (reed dance) ceremony.
Later today she will board a bus, along with other, younger maidens, and travel to King Goodwill Zwelithini’s Enyokeni Royal Palace for Saturday’s reed dance.
Speaking to the Daily News in Pietermaritzburg on Thursday, she said the event was the highlight of her life and an opportunity to show off her pride at being a virgin at her age.
“Come rain or sunshine, I will be at the reed dance. Only illness or a death in my family would force me to miss this ceremony.”
Ngcobo will take girls from her Nzondweni Village in Mafunzwe area, outside Pietermaritzburg, with her. The girls had qualified to attend the reed dance after months of virginity testing and workshops on the importance of staying a virgin until marriage.
“I am not ashamed that I am not married. I also don’t regret not having children of my own. In fact, I am fulfilled by the role I play in my community and by the example I am setting to young girls, that having a man and bearing children is not everything and definitely not something that defines us as women,” she said.
After having her heart broken by a man she had loved and who had paid her bride price as per the lobola tradition, she decided to stay single. “Fortunately, I was still a virgin and I felt that I left him with my dignity intact. I wanted to save myself from more heartbreak.”
She has since lived a happy, fulfilling life. Ngcobo attended virginity testing all her life, but only started attending the reed dance 20 years ago.
“I dreamt of attending the reed dance since I was a young girl. The problem was getting transport to travel to the royal palace,” she said. Taking part in the ceremony only became a reality for her and others when the Msunduzi Municipality provided funding for transport and food. “For maidens, attending the reed dance is the most precious and exciting cultural practice we do.”
Ngcobo is the leader of a cultural group of maidens.
Nomagugu Ngobese, a cultural activist and director of the Nomkhubulwane Culture and Youth Development Organisation, said Ngcobo had been one of the most loyal maidens and had played a huge role in getting more and more maidens to attend the reed dance.
“We should not take virginity testing lightly. We need to encourage and save our girls from killer diseases such as HIV and Aids and the best thing to do is for them to abstain from sexual activities,” said Ngobese.