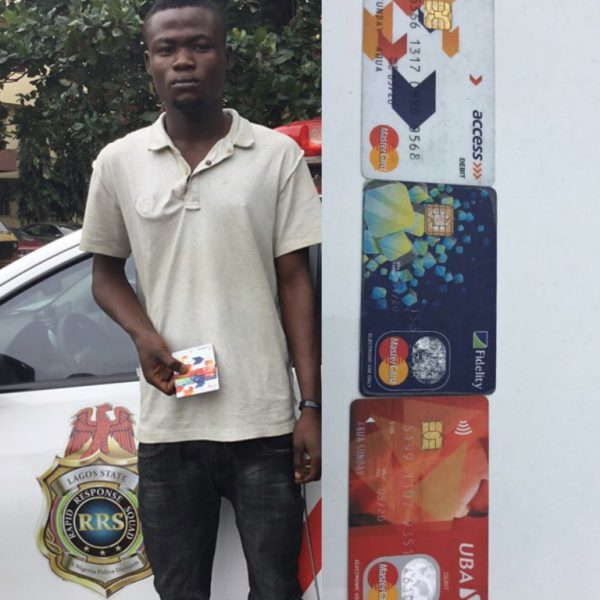 A 300 level student of Ambrose Alli University, studying Library and Information Science identified as Mayaki Best has been arrested by men of the Rapid Response Squad of the Lagos State Police Command after he was traced to Edo state.
He was arrested for posing as an online custom auctioneer after he cloned  the website of Lagos State College of Health Technology and duped several admission seekers of large sums of money.
Mayaki was tracked to Edo State following a petition signed by the Provost of Lagos State College of Health Technology, Dr Moyo Kasim, on the fraudulent activities of one Dr. Odeh Philip Oteche, who cloned the website of the institution and requesting for varied sums of money from admission applicants.
He had cloned admission application and bank details, stating that applicants pay N2,500 for admission form. Mayaki who was in possession of the phone line given in the fraudulent bank details, was arrested with three ATM Cards, which carried Otache Philip Odeh, the owner of the fraudulent account.
He was also found with other ATM cards of Access bank and UBA with the name, Abua Sunday. In his confession to the police, Mayaki stated that he was the brain behind the cloning of the institution’s website and he had withdrawn series of deposits made to the accounts by different applicants.
He added that he started admission racketing when online custom auction of automobile and seized items failed to yield expected returns. Apart from these, the suspect disclosed that he also uses dating platforms for scamming.
Through the cloned institution’s website, Mayaki stated, he had collected deposits ranging from N2,500 to N157,000, adding that one Charles and Ganiyu Balogun now at large were accomplices. He stated that he opened Access Bank and UBA accounts with Sunday Abua for Nigerian Customs auction vehicles and goods.
He disclosed that the three facebook accounts of female custom officers he had been using. Also found in his possession, were different soft copies of unfilled custom papers.