The Ekiti state governor has declared his intention to run for presidency in 2019 and has received mixed reaction from some people. According to some Nigerians, they think he is not fit to rule the country but some believe otherwise. Governor Ayo Fayose has governed the Ekiti state people for several years now and has earned their trust and loyalty. 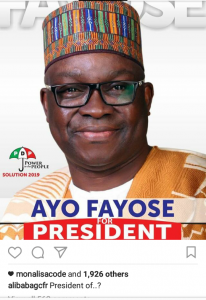