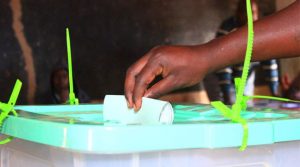 A journalist, identified as Oluchukwu Ajulufo, has  emerged as the governorship candidate of the Labour Party, LP, for the November 18 governorship election in Anambra.

Mrs. Ajulufo was nominated by affirmative action and unanimous votes of the 64-member delegate at the primary election of the LP in Awka on Saturday.

The News Agency of Nigeria reports that Mrs. Ajulufo is the second female to emerge as governorship candidate in the state, after Kate Okafor of African Conscience Democrat, ACD.

The National Chairman of Labour Party, Abdulkadir Abdulsalam, who declared Mrs. Ajulufo winner of the primaries, expressed satisfaction with the process.

According to him, two persons participated in the exercise, one did not meet up with the electoral guidelines while the other person, who met the guidelines has been declared as the party’s candidate for the November 18, governorship election.

Mr. Abdulsalam, who described Mrs. Ajulufo’s emergence as a “divine mandate”, also expressed confidence that the party would win the forthcoming governorship election in Anambra.

The national chairman solicited the support of the party faithful so that its candidate would win the election in November.

He, however, urged aggrieved party members to file their petitions with the party and assured them that the party’s leadership would act on them.

“We are ideological and social democrats and we do not impose candidates or carry out selective justice,” he said.

In her remarks, Mrs. Ajulufo commended the exercise and the Labour Party for accommodating a female candidate.

“If elected, I will ensure security of lives and property, employment opportunities for youths and women and robust agricultural programmes to make the state the food basket of the nation, among others.”

However, Okey Enemuo, another aspirant at the primaries and former House of Representatives member, expressed dissatisfaction with the outcome of the exercise, describing it as a “laughing stock”.

“As far as I am concerned, no primary election held today.

“Throughout the time I prepared for this primary election and all through my campaigns in the wards, no one showed up to contest against me.

“I was supposed to be the consensus and only candidate but what we saw today is laughable.

“Ajulufo never declared interest; otherwise, she should show evidence of payment for the forms.

“Besides, she is still a member of the national executive of the party, who has not even resigned her position. This is unethical and illegal,” Mr. Enemuo said.