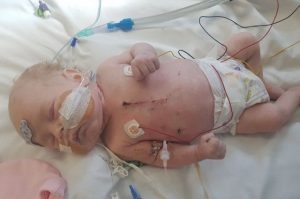 There can be miracles when you believe, that was the story of a baby that  defiled all odds after she survived despite doctors thinking she won’t and advising that her mother aborts her due to her condition. It was discovered the baby developed just half of her heart.

Mum Lisa Ambler, 32, said she on countless occasions was advised to abort her baby when doctors discovered that the then unborn Lacey-Janet has an issue with her heart.

Lisa, who herself is battling with cysts on her ovaries a condition that makes it difficult to conceive, refused to abort. Lisa said immediately her baby was born she stopped breathing almost immediately and she had to be taken in for an emergency surgery.

Lisa said: “It amazes me how she even made it through the pregnancy. When we were told about the problems with Lacey-Janet’s heart we were told to abort but for me it was all a big dream.

They kept saying that she wasn’t going to live long but we were never going to abort her.” Lisa, who lives in Hull with husband Michael, added: “She will need heart care for the rest of her life. But after seeing what she has already been through as a tiny baby, I am confident she is only going to get stronger.”