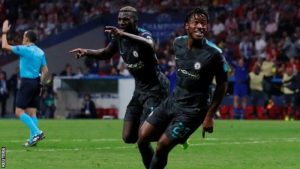 A 94th-minute goal from Michy Batshuayi was all Chelsea needed to snatch a dramatic victory against Atletico Madrid to maintain their 100% start in Champions League Group C.

Substitute Batshuayi tapped home from close range with the last kick of the game from Marcos Alonso’s cross.

The Blues fell behind to a 40th-minute Antoine Griezmann penalty despite having the better of the first half when David Luiz needlessly pulled the shirt of Lucas Hernandez at a corner.

But Chelsea, who hit the post through Eden Hazard in the opening stages, again impressed after the interval and were rewarded when Alvaro Morata equalized with his fourth goal in five days.

The Spaniard deftly flicked Hazard’s nice left-wing cross into the far corner for his first Champions League goal for Chelsea.

BBC Sports reports that Batshuayi’s winner came after missed opportunities for Cesc Fabregas and Morata as Chelsea became the first English team to win away to Atletico and condemn them to defeat in their first European game at their new stadium.

It means Chelsea stay top of Group C on six points, two clear of Roma and five ahead of third-placed Atletico.