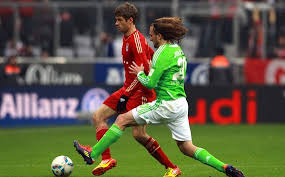 Defending Champion of the German Bundesliga, Bayern Munich, shared the spoils of the game after giving up a two-goal lead at home as they were held by Wolfsburg.

Robert Lewandowski opened the scoring with a penalty, his 11th goal in nine games this season, and Arjen Robben made it 2-0 with a deflected strike.