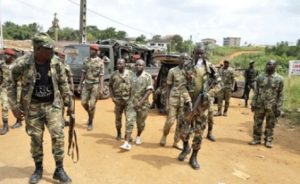 A large number of Boko Haram terrorists were killed by the  troops of the Mobile Strike Force Teams, MSTs, recently deployed in the Operation Lafiya Dole, on Monday.

This was confirmed in a statement issued by Sani Usman, the Director Army Public Relations, the operation was, “a successful ambush at Firgi-Banki junction road in Borno, many other terrorists escaped with gun wounds.”

Mr. Usman said that items recovered from the terrorists include 18 bicycles, 15 bags of grains, 17 gallons of grain, five empty gallons, six cutlasses, a sword, water bottles and pairs of slippers.

He explained that the Chief of Army Staff, Tukur Buratai, through the Theatre Commander, Operation Lafia Dole, Ibrahim Attahiru, recently inaugurated the MSTs.

Mr. Usman said that the teams, who are highly trained and well equipped, injected into the operation the mandate of securing the Main Supply Routes of the terrorists in addition to conducting limited clearance operations.