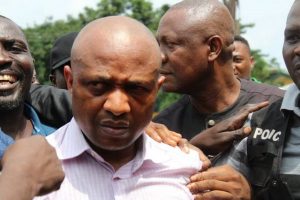 The N300 million suit that was  instituted against the Inspector-General of Police(IGP), and three others, by suspected billionaire kidnapper, Chukwudumeme Onwuamadike a.k.a. Evans, challenging his continued detention, was today again adjourned till 21st September 2017.

The presiding Judge Chuka Obiozor of the Federal High Court, Lagos while adjourning the matter today declared that there was no urgency for the suit to be hear during vacation again, as arraignment of Evans before the State High Court, last week Tuesday has mitigated against the urgency in the suit.

Ogungbeje argued that Evans’ detention since June 10, 2017 without being charged to court was a violation of his client’s fundamental rights enshrined in sections 35 (1) (c) (3) (4) (5) (a) (b) and 36 of the Constitution of the Federal Republic of Nigeria.

For his alleged unlawful detention without being charged to court, Evans wants the court to award N300m damages against the police in his favour.
Joined as co -respondents in the suit are the Nigerian Police Force (NPF), Commissioner of Police (COP) Lagos State and the Lagos State Anti-Robbery Squad (SARS).

Another vacation judge, Justice Abdul-Azeez Anka of the Federal High Court, Lagos had earlier fixed August 29,2017 to deliver judgement, but due to fresh application filed by IGP and NPF, the court fixed another date for the judgment.

Then court fixed today for the hearing of fresh application filed by IGP and the NPF .

However, during today’s proceedings Justice Obiozor held that there was nothing urgent in the matter again, due to the latest development on the matter, the court therefore, adjourned till September 21 for further proceedings.

Evans and his co-accused were arraigned before the Lagos State High Court, Ikeja , on a two count charge, on August 30,2017.

He was arraigned before Justice Akeem Oshodi , he pleaded guilty to the two counts charge of conspiracy and kidnapping leveled against him and five of members of his gang

Apart from Evans, also pleaded guilty to the two count charge was Uche Amadi, while the only female member of the gang, Ogechi Uchechukwu, Chilaka Ifeanyi, and VIctor Chukwunonso Aduba pleaded not guilty to the charge.

However, the fourth accused, Okwuchukwu Nwachukwu, pleaded guilty to the conspiracy count, but denied the kidnapping allegation.

The offences are contrary to and punishable under sections 411and 271 of the criminal Laws Cap. C17, Laws of Lagos State of Nigeria, 2015.