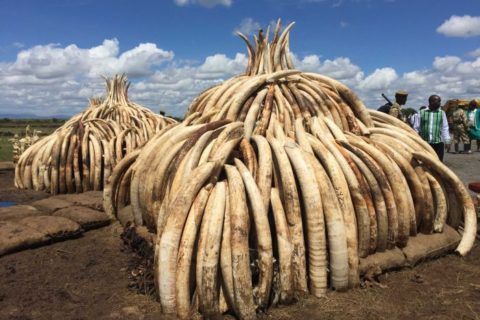 The Sokoto Area Command of the Nigeria Customs Service (NCS) has intercepted two elephant tusks weighing 65 kilogrammes and valued at more than N14 million. The Public Relations Officer of the command, Mr Magaji Mailafiya, disclosed this to the News Agency of Nigeria(NAN) on Wednesday in Sokoto.
Mailafiya said that a vehicle  with registration number: BRK 53 MF was arrested along with the tusks at Nigeria’s border with Benin Republic  in Lolo, Kebbi.
“The price of raw ivory in the international market is estimated to cost $730.00 per kg, which brings the duty paid value of the seizure to a total of N14, 472,250.00,’’ he said.
According to him,  the Customs Area Comptroller, Mr  Nasir Ahmed, has inspected the tusks at the Command Headquarters in Sokoto.
Mailafiya said that  the Comptroller described the seizure as part of the Customs’ contribution to the fight against poaching of endangered species in Africa where the trade in elephant tusks constituted part of the illegal Ivory trade.
He also quoted the comptroller as commending the efforts of the operatives of the Service at the  Lolo border for the feat, and urged them to be on alert to prevent illegal  importation of  small arms and light weapons .
The Spokesman said the command had begun investigation into the source of the two tusks.