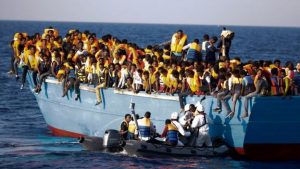 The International Organization for Migration (IOM)  announced on Monday that  the real number of migrant deaths were far higher than the numbers reported.

The UN Migration Agency in a new report on migrant deaths and disappearances worldwide through its Berlin-based Global Migration Data Analysis Centre said many migrants deaths were never recorded.

“Since 2014, more than 23,000 migrant deaths and disappearances have been recorded globally by the IOM. The real number is likely to be much higher as many deaths are never recorded,” IOM said.

The report is the third volume in IOM’s Fatal Journeys series, which focuses on how to improve data on missing migrants in order to prevent further deaths, and to enable the families left behind to learn more about the fate of their relatives.

“Many families continue to spend years living in limbo, not knowing whether a loved one is alive or dead as so few bodies of missing migrants are identified,” the UN migration agency said.

Fatal Journeys Volume 3: Improving Data on Missing Migrants is published in two parts with part one of the report released on Monday, examining the challenges of collecting data on missing migrants.

Part two of the report to be released in November, provides in-depth regional analysis of the data currently available, IOM said.

The first chapter of Fatal Journeys Volume 3 – Part 1 provided an update of data on global migrant fatalities since 2014, and highlighted the risks faced by migrant women and children.

Data collected by IOM’s ‘Missing Migrants Project’, the only existing database on migrant deaths at the global level, are used to present the known number and profile of dead and missing migrants in different regions of the world.

The report said that much more could be done to gather data to increase identification rates such as developing intraregional mechanisms to share data more effectively.

One approach highlighted in the report was the work of forensic teams in Latin America, which had been working together with NGOs and governments to promote the sharing of data to facilitate the identification of missing migrants.

The report underlined that the problems in communicating data could also be observed in global media coverage of migrant deaths and disappearances.

“Current standards of media coverage vary widely, and the tone of the content ranges from humanitarian concern to reproduction of negative narratives about migration,” the UN migration agency said.

It said the inclusion of migration in the United Nations’ 2030 Global Agenda for Sustainable Development and the commitment of States to promote safe, orderly and regular migration, required improved data on indicators of “unsafe migration”.

Improving information and reporting on who the missing migrants were, where they came from, and above all, when they were most at risk was crucial to building a holistic response to reduce the number of migrant deaths, IOM said.