Home News Feed Death Toll Of Nigerian Pilgrims In Saudi Arabia Rises
Facebook
Twitter
WhatsApp
Chairman of the National Hajj Commission of Nigeria, Abdullahi Mohammed, has disclosed that the number of Nigerian pilgrims who have died at the on going Hajj has risen to seven. 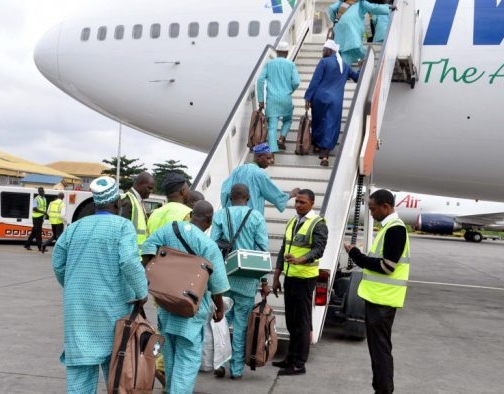 It had been reported on Tuesday that four Nigerian pilgrims to this year’s hajj in Makkah, Saudi Arabia, died during the religious event at the Islam’s holiest city.
Chairman of the National Hajj Commission of Nigeria, (NAHCON), Abdullahi Mohammed, disclosed in an interview with newsmen at Mount Arafat, Saudi Arabia yesterday that the number of Nigerian pilgrims who have died at the on going Hajj has risen to seven.
Although the identities of the dead pilgrims were not disclosed, the chairman said the pilgrims were from Kwara, Kogi, Katsina and Kaduna states and had died due to natural illness.
“We have lost seven pilgrims due to natural illness. Male and female, particularly from Kwara, Kogi, Katsina, Kaduna. No single accident recorded this year. All pilgrims were evacuated in good time.
“We will have to say that, so far so good; even the mortality recorded this year is the lowest in the last 10 to 15 years. We pray that will be the end of any mortality that we are going to record,” he noted.
Mohammad expressed optimism that the movement to Mustalifah, back to the pilgrims’ tents and the observation of stoning of the Jamarat will also be well coordinated, peaceful and that the pilgrims will finish their hajj rites safely.
“Importantly, the commission has introduced an emergency call centre. We have officers who man that call centre 24 hours. So, any pilgrim, under any distress situation, should call 90008251, 920008251,” he said.
He added that the commission has an effective and well-coordinated medical team with ambulances stationed in various medical camps to attend to emergency needs of pilgrims.
Mohammed said the commission is also coordinating well with state officials to attend to the needs of the pilgrims and expressed satisfaction over hitch-free movement of pilgrims from Makkah to Muna and to Arafat.