Mavin princess, Hadiza Blell best known with stage name Di’Ja has refuted claims that she is in a competition with fellow singer Simi.

Di’ja revealed this in an interview she granted at Simi’s Album Debut Party.

“it’s all about the music”

”You guys are the ones making things up, I think Music is for everybody, If you’re about the music, you’d know its not a Competition, We sing to create till we die.. 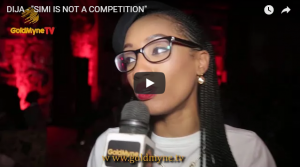