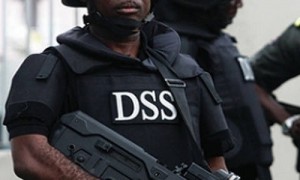 A top commander of the Islamic State for West Africa, giving his name as Husseini Mai-Tangaran has been arrested by the Department of State Service (DSS).  The DSS said his arrest saved the Federal Capital Territory (FCT), Kano, Kaduna, Niger, Bauchi, Yobe and Borno states from being bombed between September 1 and 4 when Muslims in the country celebrated the Eid-el-Fitri Mai-Tangaran.
According to the DSS, was arrested on August 31, while other members including Abdulkadir Umar Mohammed and Muhammad Ali were picked in Kano on September 3.
”This service wish to inform the general public that it has uncovered and foiled sinister plans by Islamic State of West Africa (ISWA) terrorists to cause mayhem and destruction that would have disrupted the Eid-Kabir Sallah festivities of 1st – 4th September, 2017.
“The plan was to conduct gun attacks and suic*de bombing on selected targets in the Federal Capital Territory, Abuja, Kano, Kaduna, Niger, Bauchi, Yobe and Borno states,” a statement by Tony Opuiyo, DSS spokesperson, said.
The DSS added: “The mastermind of the operation is Husseini MAI-TANGARAN, a well-known senior ISWA commander who has been on the service and Nigeria Army radar since 2012, when he spearheaded the armed attacks on the office of the Assistant Inspector General of Police (AIG) Zone I, on 20th January, 2012, as well as other public places in Kano.
MAI-TANGARAN was also responsible for the deadly explosive attacks against worshippers at the Kano Central Mosque as well as an attack on a military formation in Yobe State in 2015, which claimed hundreds of lives.
” The statement obtained by NAIJ.com said under the banner of the Islamic State in West Africa (ISWA) which he belongs, Mai-Tangaran had been preparing some members to carry out attacks on some areas of the country.
DSS described the alleged terrorist as an expert in the manufacturing of improvised explosive devices.
It was learnt that the suspects, Abdullahi Habib Audu, Bashiru Yahaya, believed to be computer specialists and Ahmed Momoh, a herbalist were arraigned before Chief Magistrate Levi Animoku on Friday, September 8.
Source: ( Naij.com )
Share
Facebook
Twitter
WhatsApp
Previous articleNorthern Elder supports Senator Aisha Alhassan public support for Atiku Abubakar
Next articleShocking !!! Man frames his own kidnap, requires N1 million as ransom
- Advertisement -

Senior Special Adviser to the president on media and publicity, Femi Adesina has faulted claims by the leadership of the Christian Association of Nigeria,...
Read more

Governor of Ondo State, Rotimi Akeredolu, says Southwest governors are prepared to meet with President Muhammadu Buhari over the whole concept of the security...
Read more

The Kaduna State Government, has said that parents who fail to send their children to school will face prosecution in accordance with extant laws. This...
Read more
- Advertisement -