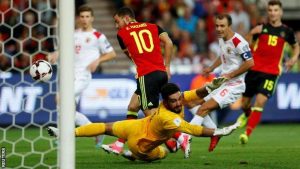 Romelu Lukaku and Thomas Meunier both scored hat-tricks as Belgium beat Gibraltar 9-0 despite playing a man short for 42 minutes.

Belgium were reduced to 10 men when midfielder Axel Witsel, scorer of their fourth goal, was sent off for a dangerous challenge five minutes before half-time.

Gibraltar defender Erin Barnett was then sent off in the 82nd minute for a professional foul on Kevin De Bruyne, before Lukaku completed his hat-trick with the resulting penalty.

Roberto Martinez’s side increased their lead at the top of Group H to six points after Greece, in second, were held 0-0 at home by Estonia.

It means Belgium will secure qualification for the finals in Russia if they win in Greece on Sunday.

Bosnia-Herzegovina missed the chance to move above Greece, letting slip a two-goal lead as they lost 3-2 in Cyprus.

The home side scored three goals in the final 25 minutes, with Pieros Sotiriou’s deflected winner set up by Southend full-back Jason Demetriou.