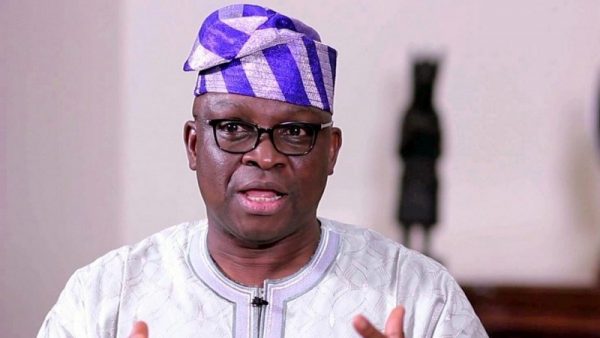 Operatives of the Economic and Financial Crimes Commission (EFCC) have arrested Ekiti State Commissioner for Finance and the Accountant General in Ado-Ekiti on Thursday.
The commissioner for finance, Chief Toyin Ojo and the account general, Mrs O.O Owolabi were arrested after Governor Ayo Fayose declared his intention to run for president in 2019. Fayose said he will contest on the platform of the Peoples Democratic Party (PDP).
A short statement by spokesman Wilson Uwujaren said: “They were picked up today following their refusal to honour previous invitations for interrogation in relation to pending investigation on the misuse of bail out funds by the Ayodele Fayose administration.” according to NAN.
Fayose while speaking at the declaration, said: “Our economy will be revived and returned to the path of progress that it was before we had the misfortune of having these clueless people in power.
“We will ensure diversification of the economy through agriculture, adequate supply of power and massive industrialization, thereby creating employment for our youths. We can do it, and we will do it.
“With me as your President, you can be rest assured of a government that will be responsive to your needs.
“You are guaranteed a federal government that will relate with all Nigerians not on the basis of ethnicity, religion, political affiliations and the percentage of votes but on equity and justice as citizens of one nation, one people, and one destiny.

“My party leaders, I present myself to you as the needed vehicle for our party to move back to the presidency. I am doing so because I am confident that with God and all of you behind me, we can do it, and we will do it.”