Fani-Kayode Bribed Me With N300m – Witness

Deolu
A witness in the N4.9billion fraud case against Femi Fani-Kayode has opened up on how he received N300 million from the man. 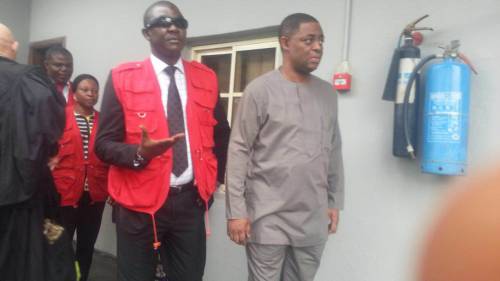 At today’s sitting, Olusegun, who is the first prosecution witness, told the court that he was contracted to print posters and flyers for the Peoples Democratic Party (PDP) Campaign Organization of former President Goodluck Jonathan in the 2015 general election.
The witness also told the court he was awarded the contract based on a referral from a man simply identified as Adedayo, who introduced him to one Aderemi Ajidahun, a member of former President Jonathan campaign organization headed by Fani-Kayode.
Olusegun further told the court that he was later introduced to one Oke who paid him the sum of N30m in two installments of N6million and N24million for the job.
While cross-examining the Witness, counsel to Fani-Kayode, Norrisson Quakers, SAN, told the court that PW1 wrote two statements, one in the EFCC office and another to the court, which he said were contradictory.
Though Quaker sought to tender in evidence one of the statements written by the PW1, the prosecution counsel, Rotimi Oyedepo, objected to its admissibility .
The prosecution counsel insisted that Quakers must “emphatically and specifically point out the contradictions in the two statements in accordance with the provisions of the law and also draw the attention of the witness to those contradictions in the two statements before they can be admitted in evidence.”
Oyedepo, therefore, urged the court to discountenance the argument of the counsel to Fani Kayode.
Also, the second prosecution witness, PW2, Teslim Ajuwon, an employee of Zenith Bank Plc., told the court how he received a letter from EFCC requesting for the account opening documentation, certificate of identification and statement of account of Joint Trust Dimension Limited.
Ajuwon, who works as Compliance Officer with the bank, told the court that he later sent the documents duly signed by him to the EFCC as requested.
However, when the prosecution counsel sought to tender the documents in evidence, counsel to the defendants objected to their admissibility.
Counsel to the first defendant, Ferdinand Obi, SAN, told the court the documents were not in his possession and that he would want to address the court from the documents.
He further told the court that the documents were purportedly printed from Zenith Bank Plc and that they were neither signed nor dated.
“This is not in conformity with the provision of Evidence Act, 2011,” he added.
He, therefore, urged the court to reject the documents and mark them as rejected.
After much arguments between counsel,  the prosecution withdrew the documents.

Share
Facebook
Twitter
WhatsApp
Previous articleSee How Single Mother Searches For Husband | Photos
Next articleEx Super Falcons Player Chichi Officially Comes out as a Lesbian, As you need to read how she did it.
- Advertisement -