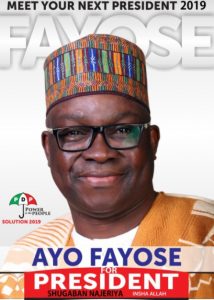 Ekiti State Governor, Ayodele Fayose, on Thursday formally declared his intention to contest the 2019 presidential election on the platform of the Peoples Democratic Party in Abuja.

The governor vowed to defeat Buhari, the incumbent President, in a free and fair contest if he (the President) was picked by the ruling APC.

While saying God had told him that he would lead the country, Fayose promised to fight corruption if elected President.

Describing himself as a rock, he said God had destined him to lead country.

“My party leaders, standing before you is Peter (The Rock) Ayodele Fayose, the man already destined by God to take Nigeria out of the present political and economic stagnation,” he said.

He dismissed the zoning formula of his party, which has zoned its presidential candidate to the North.

Sounding confident, he said he was like the biblical Joseph, stressing that he would become what God had ordained him to be.

He said the days of packaging governors and individuals as president were over, warning against the imposition of unwilling politicians on Nigerians.

“We don’t want packaged governors or president again. This time round, we need a very agile and experienced fellow like me,” he added.

Fayose, who is also the Chairman, PDP Governors’ Forum, said, “My inviting you today, distinguished leaders of our party, is to inform you formally that I will be seeking the ticket of our great party, the PDP, to contest the 2019 presidential election. This is without prejudice to our party’s position.

“However, I’m a supporter of competence and capacity, especially now that this country needs young and able leaders that can take our country out of this present state of hopelessness.”

Admitting that the PDP had zoned the 2019 presidential ticket to the North, the governor stated, “It may interest you that no one has come out in this manner to show interest and our party should not wait or beg anyone to fly its flag. Do we now say that if no one comes out from the North, the party won’t have a candidate?”

He told the leadership of the party that he would not be the first person to defy its zoning arrangements.

Fayose added, “Going down memory lane; in 1999 and 2003, despite that our party zoned the presidency to the South, the likes of Alhaji Abubakar Rimi of blessed memory and Chief Banabas Gemade contested the ticket.

“Also in 2007, some party members from the South did not only declare their intention to contest, they also showed interest and obtained nomination forms. Those from the South were Chief Victor Attah, Dr. Peter Odili, Dr. Sam Egwu, Dr. Donald Duke, Dr. Chimaroke Nnamani and Owelle Rochas Okorocha among others.”

Fayose reminded his audience how he defeated two incumbents in his state, saying nobody should doubt his desire to become the President.

He said, “Twice, I defeated incumbents to become the governor of Ekiti State and I am confident that with your support as my party leaders and supporters, I will defeat the incumbent, President Muhammadu Buhari, in a free and fair election.

“Let me state that in Ekiti, God has used me twice for our party to regain power from the opposition and I believe the same feat will be repeated at the national level.

“Therefore, I can say expressly that I am well equipped in terms of knowledge, experience as well as physical and mental capacities to hit the ground running as soon as I assume office as President of Nigeria in 2019.”

He rolled out what he said his government had been able to perform in his state.

He said, “In Ekiti State, our success story in education is there for all to see. Ekiti State was number 29 in 2014 NECO examinations but within two years, we were able to move the state to number one in 2016 and again in 2017.

“Also in the West African Senior School Certificate Examinations, Ekiti State’s performance, which was 25 per cent in 2014, moved to 74.86 per cent in 2017.

“We were able to revive this sector because we placed our teachers in the driving seat of our policies. We will do the same at the national level because we are mindful of the fact that education is the bedrock of the development of any nation.

“As a governor, I encouraged my children to attend schools here in Nigeria and I have never travelled abroad for medicare. This, I hope to sustain as president of Nigeria by making sure that our schools and health facilities are of international standard.”

Fayose also criticised the Buhari government for alleged poor performance since 2015, when the ruling APC defeated the PDP.

He said, “Today, our country is faced with myriad of problems. Our economy, which was the fastest growing in Africa when our party was in power, has gone comatose with the present managers, who are completely clueless.

“In the area of security, which they leveraged to come to power, despite claims by the government that Boko Haram was technically defeated, Nigerians are being killed by the insurgents while villages are being attacked in the North-East.

“Also, herdsmen are killing Nigerians and destroying farmlands with reckless abandon while kidnapping is now on the rise.

“Most worrisome is the fact that our country is now more divided than ever before with the unity of the country being threatened due to nepotism, religious bigotry and favouritism of the present government.”

Among those in attendance were a former Minister of Aviation, Chief Femi Fani-Kayode; a former Deputy Governor of Osun State, Senator Iyiola Omisore; and the Secretary to the Ekiti State Government, Dr. Modupe Alade.