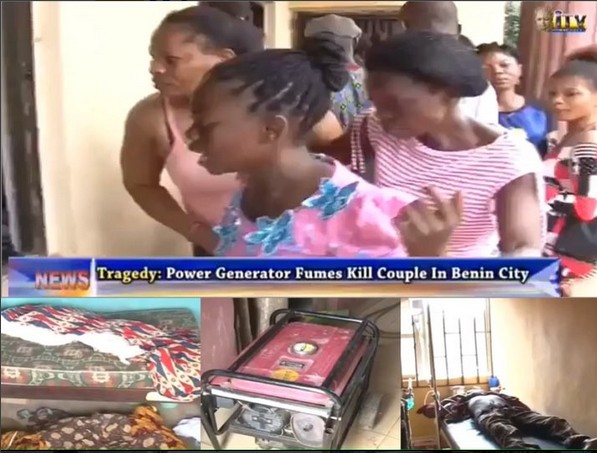 Tragedy struck in the early hours of Monday in Benin City, as a couple Imafidon Ototie and his wife were found dead in an apartment in Ototie Street, Behind Ekae Primary School, Sapele Road in Ikpoba-Okha Local Government Area.

According to ITV Benin’s Amenze Obarisiagbon, the deceased died after inhaling fume from the power generator kept on the corridor beside their room.

Daughter of the deceased wailing over the sudden death of her father and Step-Mother.

Their eldest daughter, Blessing, said she had warned her late parents to always put off the generator at night.

According to eyewitness the eldest son of the deceased, who noticed that his father, stepmother and younger brother have not woken up from sleep, with the door of their room still locked called for help. They said when neighbors forced the door open, the couple were found dead, while one of his sons survived.

Bright said he raised alarm when he returned home on Monday morning and discovered that his parents were yet to get up from the bed.

“I have warned them to put off the generator but they didn’t listen to me. .

It is like a spirit told me to leave the house and I left. I came back and saw the door locked so I raised alarm.”

Some relatives and residents who said the dead couple switched on the power generator before going to bed, advised Benin City residents to desist from using power generator indoors as exhaust fumes are dangerous.

The survivor is receiving treatment in a nearby hospital.