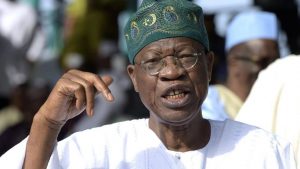 The Minister of Information and Culture, Lai Mohammed, has been challenged by the Ekiti  State governor,Ayodele Fayose, to name the “treasury looters” he alleged were sponsoring the Indigenous People Of Biafra, IPOB.

Mr. Mohammed at a news conference in Lagos on Sunday alleged that “politically disgruntled ” and “treasury looters” were sponsoring IPOB, whose agitations for independence had become a thorny issue in the Nigerian polity.

He said the intention of the sponsors was to divert attention from the efforts of the President Muhmadu Buhari administration and obliterate its laudable achievements.

“They believe that by sponsoring this group to destabilise the country and trigger chaos, they will realise their ambition of escaping justice and then be free to dip their hands into the nation’s treasury again,” Mr. Mohammed alleged.

“The signs are very clear; the activities of IPOB became heightened with the advent of this administration, and have been unrelenting since then. If this is coincidental, then that coincidence is uncanny, at the least.”

His comments also followed an earlier statement by the All Progressives Congress, APC, in Ekiti State, accusing Mr. Fayose of funding the IPOB.

The party’s publicity secretary in Ekiti, Taiwo Olatunbosun, alleged that Mr. Fayose’s show of solidarity for IPOB was to ensure the distabilisation of the country so he could escape justice for his misdeeds.

Although Mr. Fayose has denied funding the group, he has however, not denied his support for the agitation of IPOB, saying the group is merely exercising its constitution rights.

A statement signed by his Special Assistant on Public Communications and New Media, Lere Olayinka,, on Tuesday, said it was time Nigerians began to hold the information minister accountable for his “frivolous” claims.

“More than 20 months after he claimed that 55 Nigerians stole over N1.34 trillion from the country’s treasury from 2006 to 2013, Lai Mohammed is yet to tell Nigerians who the 55 people are,” he said.

Mr. Fayose also described the minister as “an embodiment of contradictions, who speaks from several sides of his mouth, turning himself to a vegetable while struggling to defend a government that has done more evil than good to Nigeria and its people.”

The governor called on Nigerians to prevail on the Information Minister to name the treasury looters sponsoring IPOB and provide proof of the sponsorship.

“In the history of his lying career, if he (Lai Mohammed) is able to read through his past comments and juxtapose them with his present comments, he will realise the contradiction that he has become,” he said.

“On June 10, 2013, Lai Mohammed spoke against the proscription of Boko Haram, saying that it stifled the press and tampered with the fundamental human rights of Nigerians. He also spoke in support of true federalism and restructuring of Nigeria. But today, in defense of President Muhammadu Buhari’s government, everything Lai Mohammed supported then, he is now against and what he was against then, he now supports.

“It is shameful that Lai Mohammed now runs speedily to defend the lion king and his autocratic government, so that he won’t be devoured and in the process of trying to avoid being sacked, he is manufacturing lies like pure water.”

Mr. Fayose said there was no law in Nigeria empowering the military to declare any organisation terrorist. He also called for a UN investigation into the IPOB crisis.