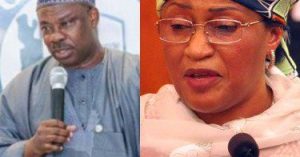 Governor of Ogun State, Ibikunle Amosun, says the recent comments made by the Minister of Women Affairs, Aisha Alhassan, shows that she is clearly working against the Buhari-led administration.

The governor was at a function over the weekend where he shared his opinion on the Minister’s comment. Amosun said it is only President Buhari that can decide whether or not she should be sacked for her utterances.

“Well, I am not Mr. President and I know that at the appropriate time, he will review things. For somebody to come out and say such a thing means clearly she is even working against the government and she will not want that government to succeed, yes, that is my own belief, although I may be wrong, but if I were in her shoes, I would have resigned after making that statement”.