Home News Feed I Killed My Baby For Money Ritual – Nursing Mother
Facebook
Twitter
WhatsApp
A woman that can only be described as evil has confessed to how she murdered her newborn baby in a bid to get rich. 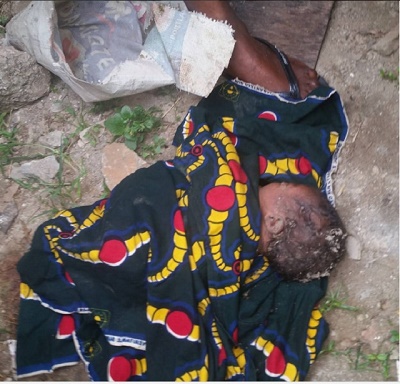 Worried obsessively about the family’s abject poverty, a 38-year-old woman, Kwaseve Fagal, said she murdered her newborn baby boy for money ritual to get out of the woods. It was a decision she didn’t blink to take when a native doctor presented her with an alluring offer to make her rich overnight.

On August 14, 2017, the housewife who had nursed a full-term pregnancy, was delivered of a baby boy in her home at Gakerko village, Keana Local Government area of Nasarawa State, but the joy of her husband, Paul Fagal, aged 40, evaporated shortly after. Though the couple, peasant farmers, earlier had two children in their 14 years of marriage, the arrival of the new baby lifted the drowning soul of his father who had been toiling over the years, albeit with difficulty, to fend for his family.

Help from the devil

Unknown to Paul, his wife had been suffocating as they laboured for survival in their years of wedlock and was waiting on the devil for help. Acting on the instruction of a herbalist, she discreetly took the infant to a secluded area of the community shortly after birth and killed him. Then, she took his blood in a clay pot and dumped the remains in a nearby stream.

But the bubble burst as the sudden disappearance of the baby aroused apprehension in the community, amid suspicion that the mother from hell might have committed sacrilege. After summoning all the women in the community for interrogation, a threat by the village head, Mathew Oloko, to further conduct orthodox and traditional probe into the incident, unveiled Kwaseve as the perpetrator of the dastardly act.

She eventually led a search party to a stream where the decomposed body of the baby was recovered, but kept sealed lips on the motive for the act till she was arrested and taken away by the police.

However, in a chanced encounter with our correspondent at the Criminal Investigation Department of the Nasarawa State police command where she is in custody, she told a shocking tale of the circumstances that led her into killing her child to shake off the shackles of poverty.

She had been troubled over her husband’s inability to overcome poverty despite the fact that they toiled daily to make ends meet. Rather than reprieve, the situation worsened to a point that putting food on the table became a difficult task. Sometimes, the family stayed for days without food, and despair set in.

Faced with gloom, she accepted the devil’s alternative when herbalist in the community she identified as Alhaji Abass Loko, gave her hope. Kwaseve was six months pregnant when he offered her help, which she grabbed pleasantly, even though the price was her unborn baby.

“Life became very difficult for my husband and I, to a point that having food daily became a problem, not to talk of catering for the two children we already had. The kids were not feeding well; we go hungry for days because we don’t have money to buy food. Though we are farmers, things didn’t just work well for us. That was why when the baba (Alhaji Loko), who hails from Kaduna State approached me with an offer to lift the burden of abject poverty, I gladly accepted”, she narrated.

Kwavese further revealed: “He told me if I sacrificed my unborn child for rituals, I will never be poor again; that I will produce money as desired, but warned me not to disclose the arrangement to my husband. He instructed me that when I am delivered of the baby, I should get a clay pot and discreetly kill the child at a stream, put some of his blood in the pot and return with it properly covered. He asked me to throw the remains of the body into the stream, conceal the pot filled with blood in a sack and keep it at a hidden spot inside my thatch-roofed mud kitchen. He warned that nobody should open the sack except me, and that I should get him a portion of the blood, which I did. He assured me that after 12 days of performing the ritual, money will start spinning inside the sack daily, and poverty will no longer be my companion. I kept the plan secret and did as instructed; but I committed the act in the interest of the family with the conviction that even if I killed the baby to get out of poverty, I will bear another child in future”.

Now, she is in deep trouble and the herbalist who allegedly prompted her into committing the act has vanished from the community. Besides being holed up in a police cell awaiting a date with the law, Kwavese says she is haunted by images of her dead baby which constantly roamed her mental landscape. “His shrill cry as I murdered him echoes in my memory, and it haunts me; I’m full of regret, but it is too late. It is hard and unthinkable that a mother would do that to her child, but I did it. I want my husband to forgive me because I did it to better our lives, as we had owed huge debts with no hope of offsetting them. I will go to God to seek forgiveness if I am lucky to be left off the hook”, she said.

Time shall tell if her traumatised husband, Paul, would accept her plea for forgiveness, but certainly, not at the moment. He is still at a loss as to why she committed such heinous act, as he prayed God to grant the soul of his son peace, and eternal rest. “I will consult with my parents and in-law on the fate of my wife”, he said when contacted on the incident.