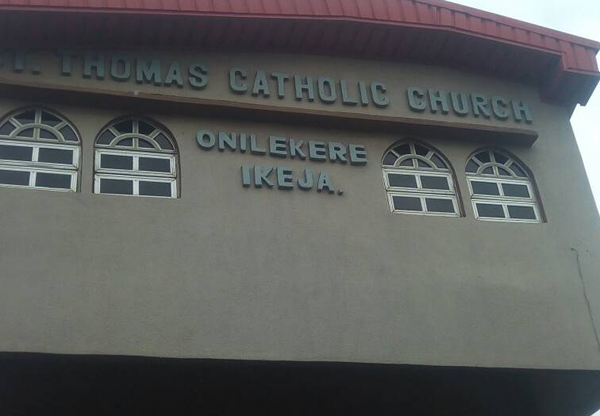 The Lagos State Police Command have announced the arrest of five suspects in connection with the shooting of a Rev. Father, Daniel Nwankwo, at St. Thomas Catholic Church, Onilekekere, Cement.

The spokesperson of the command, ASP Olarinde Famous-Cole, in a statement said the suspects are being interrogated for vital information to aid Police investigation.

“During early morning mass at St Thomas Catholic church Onilekere, Cement B/Stop Ikeja, some hoodlums posing as worshipers at about 8:30 a.m., requested to have a dialogue with Rev. Father Daniel Nwankwo who heads the parish.

“The Rev Father who unsuspectingly granted the hoodlums an audience outside the church auditorium for a yet-to-be determined reason was shot by one of the hoodlums who spoke fluently in Igbo language with a locally made pistol.

“The Rev. Father raised alarm, while the hoodlums jumped the fence and escaped toward an adjoining canal.”

Famous-Cole said the Rev Father was immediately taken to LASUTH for medical attention where he was being treated, and that is in stable condition.

“The Commissioner of Police, Edgal Imohimi, was at the scene and spoke with a witness who confirmed that three assailants of Igbo background who were not known to be members of the church were seen having a conversation with the Rev. Father before he was shot.

“The CP has also visited the Rev Father who spoke with him and confirmed that the Rev Father is been given adequate medical care as he is recuperating fast.

“The commissioner also immediately ordered a crack team of detectives and operational officers from the police command who were dispatched to the scene and area leading to the canal where an eye witness confirmed the hoodlums ran toward.

“Five suspects have been arrested in connection with this act and they are currently being diligently interrogated for vital information to aid the Police investigation.

“The Commissioner of Police in Lagos State is advising the people of the State to be vigilant and security conscious at this time and must identify and report any strange faces & suspicious movement.

“He has also ordered the deployment of static Police Guard and instructed the Area Commanders and DPO’s to provide static police guard on a 24-hour basis in all Churches and Mosques across the state instead of only on Fridays & Sundays like it has been done in the past .

“Imohimi has also assured the people that every asset of the command will be deployed to make sure these hoodlums that made an attempt on the Rev. Father’s life will be arrested and brought to book,”