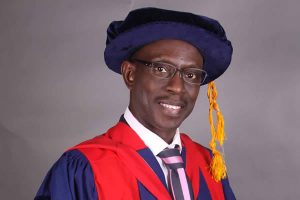 The Vice Chancellor of  Lagos State University (LASU), Prof. Olanrewaju Fagbohun has finally broken silence over the dismissal of the institution’s Chairman, Academic Staff Union of Universities (ASUU), his deputy and 13 other staff members, saying it was not politically motivated.

Prof. Olanrewaju said, “The dismissal is not politically motivated but to sanitise the system,” he told a media briefing in Lagos.

He said the dismissal of the 15 staff members, most of who are PhD holders, followed a “thorough investigation of specific documented allegations of misconduct levelled against them.”.

Fagbohun said he inherited the petition as part of the handover note by the immediate past Vice-Chancellor, Prof. John Obafunwa, to the council, insisting that he “had no personal interest in the case.”

Those dismissed include ASUU Chairman, Dr Isaac Oyewunmi, and his deputy, Dr Adebowale Adeyemi-Suenu, among others.

A statement by the university said the Governing Council took the decision at its meeting of Sept. 7.

The university said it was established that Oyewunmi demanded the sum of N50, 000 from 2003 modular year students of Political Science Education on sandwich programme to process their results.

It also alleged that Adeyemi-Suenu unilaterally altered the results of 12 students already advised to withdraw by Senate in the Department of History and International Studies in the 2015/2016 academic session.

While others were accused of defaulting on conditions of their training such as leave bond and abandonment of duty.

Fagbohun said the cases of Oyewunmi and Adeyemi-Suenu and others had nothing to do with their roles in the union’s activities.

“The university sees the frantic efforts being made by some individuals to make these cases a union issue as a deliberate ploy to distract and hoodwink members of the public.

“The university acted strictly in conformity with her rules and regulations, the petition pursuant to which Oyewunmi was investigated for same dated Oct. 6, 2016, was copied the Governor.

“Also, Deputy Governor, Honourable Speaker, Attorney General and Commissioner for Justice, the Special Adviser on Education, the Chancellor and Pro-Chancellor were also copied, the VC said.

Fagbohun said he wrote the three members of staff who were mentioned in the petition and they all responded that Oyewunmi indeed demanded money.

He said it was premised on this that a fact-finding panel headed by Prof. Michael Ikhariale was set up and the panel also recommended that Dr Oyewunmi had a case to answer and the fact-finding panel called witnesses to testify against Oyewunmi.

On Adeyemi-Suenu’s case, he said the management had directed that a forensic audit should be carried out on the alleged alteration of results perpetrated by him.

In his reaction, ASUU Secretary in the institution, Dr Tony Dansu, disagreed that the vice-chancellor inherited the case as claimed.

Dansu questioned why the case was not followed from 2012 until 2016 if there was no wrong motive behind it and described the allegations as spurious.