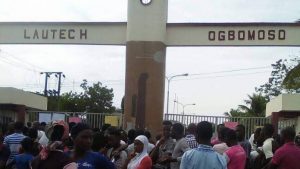 The Ladoke Akintola University of Technology, Ogbomoso chapter of the Academic Staff Union of Universities and other workers’ unions in the institution have said they will not resume on Friday (today ).

The LAUTECH management had directed the lecturers, workers and the students of the university to  resume on Friday after over eight months’ forced holiday.

According to, the Chairman of ASUU at LAUTECH, Dr. Biodun Olaniran, and the Chairman of the Joint Action Committee at the university, Alhaji Muraina Alesinloye, in separate interviews with PUNCH on Thursday, said that none of the workers’ unions would resume because they were not aware of the resumption directive.

The JAC comprises the Senior Staff Association of Nigerian Universities, Non-Academic Staff Union and the National Association of Academic Technologists.

The ASUU chairman said the union was not even aware that the university authorities had announced the resumption date.

He recalled that the union embarked on an indefinite strike because of its demands that were not addressed by the governments of Oyo and Osun states.

According to him, the demands included payment of their 11 months salaries; earned academic allowances; gratuities and pensions.

The chairman of the JAC also said that none of the three unions comprising the JAC was aware of the resumption.