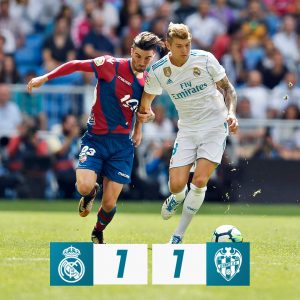 Real Madrid paid for the absence of Cristiano Ronaldo and a series of missed chances by Gareth Bale as they were held 1-1 at home by Levante on Saturday.

A slow start by a much-changed Real team was punished when Ivi Lopez fired newly-promoted Levante into a shock lead after just 12 minutes.

The European champions responded thanks to Lucas Vazquez’s equaliser before half-time, but failed to break Levante’s resistence despite incessant pressure in the second-half.

And their frustration boiled over when Marcelo was shown a straight red card for kicking out at Jefferson Lerma as the game entered stoppage time.

Despite Ronaldo’s continued absence through suspension, Bale and Isco were left on the bench, whilst Luka Modric and goalkeeper Keylor Navas were left out the squad completely.

And the European champions were caught cold by a sluggish start as Levante went in front thanks to some awful Real defending.

A Levante long-throw from the right was allowed to bounce inside Madrid’s six-yard box before Ivi spun and fired across Kiko Casilla into the far corner.

The hosts were dealt another blow midway through the first-half as Karim Benzema limped off and with no other natural striker on the bench, Bale was forced to play as an auxiliary centre-forward.

Madrid ramped up the tempo as the half wore on, but had to rely on a set-piece to level nine minutes before half-time.

Sergio Ramos’s towering header was parried by Raul Fernandez, but Vazquez bundled home the rebound into an empty net.

Bale then had a huge chance to turn the game around, but was denied by a smart stop from the Levante ‘keeper as he tried to curl the ball home with the outside of his left foot.

The Welshman continued to be the focal point of the Madrid attack after the break, but, even after the introduction of Isco, Madrid missed Ronaldo’s cutting edge in the final third.

A frantic finish saw Bale head inches wide from Isco’s cross at the back post four minutes from time.

Marcelo then saw a fierce effort from the edge of the box turned behind by Fernandez, but the Brazilian appeared to kick out at Lerma as he hit the ground and was shown a straight red card.

Despite their numerical disadvantage, Madrid still nearly grabbed all three points as Toni Kroos’s effort from the edge of the area clipped the outside of the post.

However, for the second consecutive home game, Real let two points slip away to hand the early initiative in the La Liga title race to Barcelona, who host Espanyol later on Saturday.