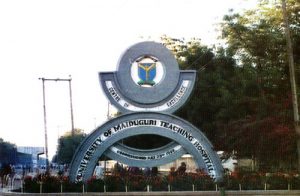 The nationwide strike by the National Association of Resident Doctors, NARD, has paralysed normal medical activities at the University of Maiduguri Teaching Hospital, UMTH.

The News Agency of Nigeria, NAN, reports that resident doctors in the state on Tuesday joined the industrial action thus crippling the smooth running of healthcare services at the hospital.

The strike came amid the challenges of insurgency and cholera outbreak in Maiduguri.

A NAN correspondent who visited the hospital reports that only senior surgeons, consultants and other cadre of health workers were attending to patients at various departments of the hospital.

NAN also reports that there is low turnout of patients at the General Out Patients Department, the National Health Insurance Scheme clinic, Accident and Emergency, and Ante-natal Care unit.

Bashir Tahir, the Chairman of the Medical Advisory Committee, said that the management adopted proactive measures to facilitate smooth running of services at the hospital.

Mr. Tahir assured that the hospital would continue to provide normal services in view of the emergencies occasioned by insurgency in the state.

“We remain operational to enable us attend to the humanitarian and health needs of the people in the state.

“The consultants are running the services pending the time resident doctors call off the strike,” said the CMAC.

Muhammad El-Yakub, President of NARD, UMTH Chapter, said that the association would mobilise its members to provide normal services in event of emergencies.

However, Mr. El-Yakub disclosed that about 150 resident doctors stayed away from their duty posts in compliance with the strike directive.

“In the case of emergencies, we will notify the national leadership of the association, who will give further directives to our intervention during emergencies,” he said.

Ismaila Kabiru, a patient, commended the hospital management for the services provided in spite of the strike.

Another patient, Zainab Bukar, who attended the ante-natal clinic, called on the striking doctors to call off the strike in the interest of the public.