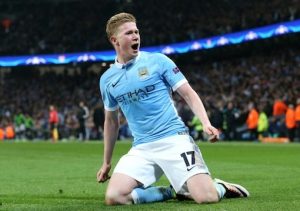 Belgium midfielder De Bruyne exchanged passes with the excellent David Silva before curling in his first goal of the season from the edge of the area. Raheem Sterling added a late second from fellow substitute Bernardo Silva’s cutback.

The Argentine also had two further efforts pushed away by the Ukraine goalkeeper.

Having found the net 22 times in their previous five games, City were expected to steamroller their opponents but were left frustrated in a goalless opening period which saw De Bruyne shoot wide from a one-on-one situation and Leroy Sane drill a low shot inches off target.

According to BBC Sports, Shakhtar had chances themselves, and Brazilian Marlos forced Ederson into a fine, full-stretch save, while former Newcastle striker Facundo Ferreyra nodded a free header wide from six yards out.

Eredivisie champions Feyenoord, who were thrashed 4-0 by City in their opening group game, lost 3-1 against Serie A side Napoli in Tuesday’s other group game.