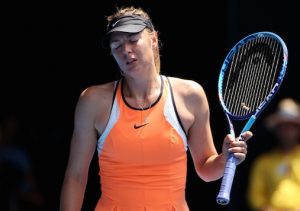 It was the end of the road for Maria Sharapova’s as she gets dumped out of the fourth round of the by 16th seed Anastasija Sevastova  5-7 6-4 6-2.

The 27-year-old will play Sloane Stephens in the quarter-finals, after the American beat Julia Goerges.

Sharapova, ranked 146th after returning from a doping ban in April, was given a wildcard into the main draw.

According to BBC Sports, the 2006 champion had played just one match since May coming into Flushing Meadows, with injuries forcing her out of the grass-court season and US Open build-up.

She played superbly to upset world number two Simona Halep on the first day of the tournament, and then beat Timea Babos and Sofia Kenin on her way to the last 16.

Sevastova proved too strong, however, the 5ft 5in Latvian’s defensive skills and ability to create angles ultimately derailing the Russian.

“The first set was very close, it could have gone either way,” said Sevastova.

“She played unbelievable throughout the first and second set and I just kept fighting, running every ball, and just stayed there.”

Sharapova ended the match with 51 errors to 42 winners as she pressed too hard in trying to break down Sevastova’s brilliant defence.

The Latvian went close to taking the first set after coming back from 4-1 down, but Sharapova clinched it with two magnificent forehands in game 12.

The momentum had already begun to swing though, and Sevastova would level thanks to a single break at 2-1 in the second – in one rally lobbing Sharapova twice, prompting the Russian to scramble left-handed in desperation.

A six-minute bathroom break ahead of the decider apparently did not have the desired effect as Sharapova quickly fell 3-0 down.

She had said after her opening match that “this girl has a lot of grit”, and it was in evidence as she cut the deficit to 3-2, but in the end Sevastova had too much.

Sharapova fought off three match points before a big first serve left the five-time major winner flailing at a return that flew wide after two hours and 17 minutes.