Deolu
The residents of a local community in Kano State are crying out as massive flood which is caused by torrential rainfall in the area have started exhuming corpses from the cemetery. 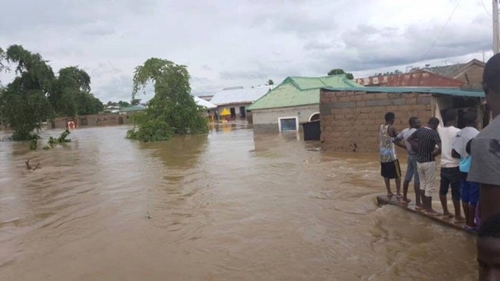 The torrential rain in the Tudun Wada area since Friday have caused flooding which exhumed corpses from the cemetery in the Nasarawa Local Government Area of Kano State said on Sunday.
According to a report by Punch Metro, apart from the Tudun Wada Cemetery, some other cemeteries in the ancient city of Kano were equally affected on Sunday as residents said the development showed that burial grounds in the Kano metropolis were in a deplorable condition and needed urgent attention.
Some of the residents of Tundun Wada, who spoke on condition of anonymity, who disclosed thta incidents of flood washing away dead bodies were not new in the town, also claimed that human skeletons, as well as fresh corpses, had been washed out of their graves by the flood in the area.
“Whenever there is heavy rainfall, most of our dead bodies would be washed out and seen floating in the burial ground. We are calling on the government to intervene and  save us from an impending epidemic,” a resident said.
A correspondent who visited the area, noticed that some corpses littered the community’s cemetery, just as it was also observed that spaces for graves had been exhausted.
The residents revealed that they recycled some used portion of land to dig graves.
The Ward Head, Tudun Wada, Alhaji Nuhu Muhammed, said, “Residents of this area have for long been experiencing flooding. It is a source of worry to us.”