Mayweather Reveals Why He Has 7 Girlfriends

Deolu
Floyd Mayweather claims he has seven girlfriends because having one is too close to having none and insists Conor McGregor fight was his last ever fight on earth. 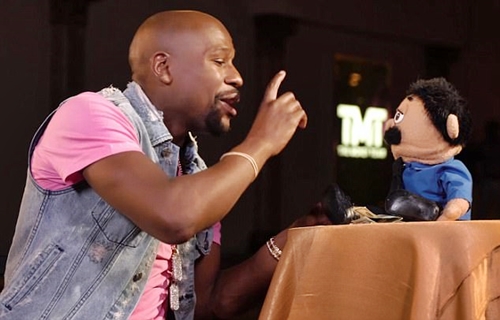 While speaking in an exclusive interview with Diego from the YouTube channel, Awkward Puppets, undefeated boxing champion, Floyd Mayweather, gave his fans an amusing insight into his life, from how many women he dates to how much money is in his bank.
According to Dailymail, the multi-billionaire sportsman revealed he has seven girlfriends and 25 cars in Las Vegas alone, including a red Bugatti and a yellow Ferrari.
When he was asked if he has a girlfriend, Mayweather who was speaking to Diego in front of his stripclub in Las Vegas called “Girl Collection”, replied by revealing that he is not a man who is loyal to only one woman.
He said; ‘How many women I have? Probably about seven deep. Lucky seven. We go out to eat, some of us travel together. Having one is too close to having none.’
Diego also pressed the money man on his wealth. Mayweather told him he has several bank accounts before being grilled on how much is held in just one of them. ‘$200million, $300million, yeah. In different accounts,’ he said.
Mayweather also insisted that his money-spinning showdown with Conor McGregor in August was definitely the last time he will enter the boxing ring.
He said; ‘The last fight that I fought, that was the money fight. For real, because the next fight, they’re going to try and get me to fight an alien on another planet.’