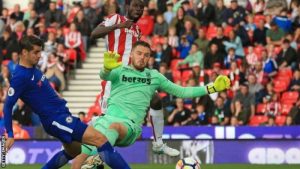 A hat-trick from Alvaro Morata helped Chelsea to claim maximum points win over Stoke City as the Premier League champions extended their winning away record this season.

Antonio Conte’s side took the lead after only two minutes, Morata showing composure to latch on to Cesar Azpilicueta’s long ball over the top and slotting it past goalkeeper Jack Butland.

Stoke gifted Chelsea a second when captain Darren Fletcher, trying to chest the ball back towards his own goal, set up Pedro, who drilled home.

A wonderful run from the halfway line from Morata, ending with a smart finish from an angle, gave Chelsea their third before the Spaniard completed his hat-trick from inside the six-yard box.

It was a clinical display from Chelsea, who converted all four of their shots on target.

Conte decided not to give Eden Hazard his first league start of the season, perhaps with the Wednesday’s Champions League fixture against Atletico Madrid in mind.

Hazard joined Cesc Fabregas and Gary Cahill on the substitutes’ bench, but Chelsea outplayed the Potters from the opening whistle.

According to BBC Sports, Stoke reacted well to falling behind so early, but failed to break through the regimented Chelsea defence, with no shots on target in the first half.

They struggled to deal with Chelsea’s pressing and counter-attack game, but there were also lapses in concentration, with Fletcher’s chest-back and Glen Johnson being caught in possession both resulting in Chelsea goals.