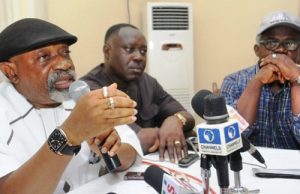 The Federal Government has reached an agreement with the Joint Action Committee of the Senior Staff Association of Nigerian Universities, Non-Academic Staff Union of Universities and National Association of Academic Technologists and the workers have announced the suspension of their strike. The suspension followed an eight-hour meeting with the Federal Government in Abuja on Thursday.

The SSANU President, Samson Ugwoke disclosed that the workers reached an agreement with the Federal Government at a meeting, which began at 4.30 pm on Wednesday and ended at 12.20 am on Thursday.

Before the strike was called off, Ugwoke had told journalists that “the three-page agreement was signed and endorsed by all of us; we are taking our document and we will make our pronouncement soon.”

Similarly, the Minister of Labour and Employment, Chris Ngige, said both parties had reached a consensus which would be passed to the union executive members for deliberation.

“Based on this conclusion, we all agreed that the JAC will consult its organ with a view to calling off the strike as soon as possible,” he had said.

Meanwhile, the Joint Health Sector Union has declared a nationwide indefinite strike with effect from Thursday.

The Chairman of the Union, Mr. Biobelemoye Josiah, who announced this on Wednesday in Ilorin, Kwara State noted that the JOHESU had earlier issued a seven-day ultimatum on September 14, 2017 to draw the attention of the government to their demands but no meaningful action was taken.

He said, “This lackadaisical attitude of the government has necessitated the resolve of JOHESU to call out all our members nationwide to withdraw their services and stay at home with effect from midnight of today (Wednesday) even after waiting patiently until this hour on the approval for adjustments of CONHESS.

“However, rallies and meetings should be held at all hospital premises every other day.”

Josiah appealed to the FG to implement all agreements, memoranda of understanding, and court judgments, stressing that the strike would not be called off until their demands were met.

“In the event that no appreciable response is received from the government within 15 days of commencement of the strike by the Federal Tertiary Health Institutions, all our members in the states, and local governments nationwide are directed to join the action by September 28,” he added.

In adherence to the declaration of the strike, nurses, midwives and allied medical workers at the Federal Medical Centre, Idi-Aba, Abeokuta, on Thursday stayed away from duty posts.

The strike commenced with an early morning rally by the members and executive council of JOHESU FMC chapter, halting activities in many of the wards in the centre.

Around  8am on Thursday, health workers, with the exception of doctors, abandoned their duty posts for protest on the premises.

They displayed placards with different inscriptions which read, ‘Enough is Enough, Stop stagnation of our members’, ‘Ministry of Health, stop destroying the health sector’,  and ‘Minister Adewole, obey the court order,’ among others.

Addressing journalists, the JOHESU chairman, FMC chapter, Samuel Idowu, said members had received shabby treatment from the Federal Government, alleging that their demands were not being attended to.

Some of the demands, he said, were improved welfare, adequate funding for hospitals, the provision of adequate equipment and prompt payment of salaries.

Idowu told journalists that the industrial action became inevitable having served the Federal Government with “20 different ultimatums totalling 192 days” without positive response from the government.

He said, “We believe the health-care team comprises various professionals and to that extent the government should be responsible enough to take care of the needs of all of these professionals so that optimal care will be given to patients.

“But what we have witnessed is lopsidedness in the way government dishes out welfare packages to team members, favouring one side of the team above other side of the team.

He added, “We believe by the labour convention, strike action is the last resort that would force the hands of government to come to the negotiating table. We are not foreclosing negotiation. We hope the government would be responsible enough to begin negotiation with our national leaders to ensure that the strike comes to an end.”

On the fate of the patients at the centre, Idowu said “only a well-motivated caregiver can provide good medical service without transfer of aggression to the patients.”