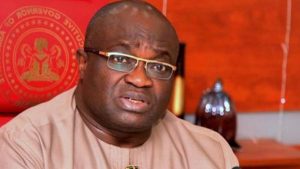 Governor of Abia State, Okezie Ikpeazu, has confirmed the gradual withdrawal of soldiers from the streets of Abia State starting from Friday.

This was confirmed  by the governor on a programme on  Channels Television, the governor made the announcement on Thursday during a press briefing on the security situation in the state.

Mr. Ikpeazu does not have any control over the army and would have to seek the support of President Muhammadu Buhari to achieve that; a move, Channels Television reported, the governor plans to do on Friday.

The Army spokesperson, Sani Usman, a brigadier general could not be reached for confirmation as at press time.

The Deputy Director, Public Relations, 82 Division of the Army, Musa Sagir, however told PREMIUM TIMES that only the governor could clarify what he meant.

Abia State has been embroiled in violence following a clash between the Nigerian Army and the members of the Indigenous People Of Biafra, IPOB.

The military had announced the commencement of its ‘Operation Python Dance 2’ in the South-east which has led to unrest in Abia State with soldiers clashing with members of IPOB members.

Abia is a main base and home of the IPOB leader, Nnamdi Kanu.

A detachment of the Nigerian Army had been present around the home of the IPOB leader on Tuesday, creating heightened tension with members of the group only days after soldiers clashed with them while trying to gain access to the group’s leader’s house on Sunday.

While IPOB supporters said that soldiers had tried to gain access into Mr. Kanu’s resident in Umuahia and shot at IPOB members, the army dismissed the claims and said the soldiers had been attacked with stones while passing around the residence in a new armoured carrier.

The unrest in the state has however prompted Governor Ikpeazu to declare a three-day dusk to dawn curfew which he later extended till Friday.