Popular Nigerian music artist Mr Eazi is currently under fire for revealing that other music artists copied his style of music. The music star who has been rumoured to be in a sizzling relationship with billionaire Femi Otedola’s daughter, Temi, disclosed that the started the trend of some popular Ghanaian slags that everyone is copying now. Mr Eazi made this revelation during a radio interview with Capital Xtra. He said: “If you want to count like five top Afro beat songs, they are all on the merger of Nigerians and Ghanaians because everybody just realized that what formula is missing. In December last year, almost 60 per cent of Nigerian artist were in Ghana attending one show or another. Now everybody is using words like Banku, Shitan, Maami and others. How come?

This statement really got to the wrong side of Nigerians, as they have called him out on Twitter. Mr Eazi has even been compared to a goat. 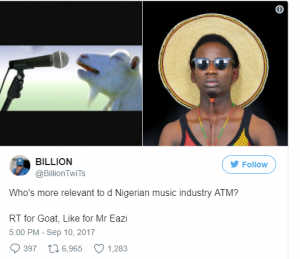