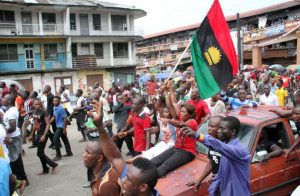 A northern group has called on youth in the region and northerners living in the south not to retaliate following the recent attacks on Hausa/Fulani community in Abia State by suspected members of separatist Independent People of Biafra,

The Arewa Youth Assembly, AYA, said video clips circulating on alleged attacks of northerners living in the south do not represent the true situation in the country.

It urged the people to ignore the activities of members of the Indigenous People of Biafra, IPOB, in the South-east region of the country.

The group had earlier threatened to shut down federal government activities in the Federal Capital Territory if then Acting President Yemi Osinbajo failed to order the re-arrest of IPOB leader, Nnamdi Kanu.

The group had said Mr. Kanu was violating his bail conditions in manners that could affect peaceful coexistence in Nigeria.

Mr. Kanu who is standing trial over treasonable offences was granted bail by a Federal High Court in Abuja on April 28 with stringent bail conditions.

In a statement on Saturday by its speaker, Mohamed Salihu and clerk, Desmond Minakaro, AYA tasked northern youth to be law abiding and avoid violent reactions across the 19 northern states.
“We wish to condemn in totality the recent attacks on Northerners in Abia and Rivers States.

While we consider this as barbaric, undemocratic and uncivilised, we wish to call on the various security operatives within the southern zones to provide adequate security cover for northerners living in that region”

“It is very clear now that the activities of the IPOB Leader, Nnamdi Kanu and his followers are only aimed at destabilising the unity of our great country, Nigeria. Hence, the justification of our earlier call for his arrest,” the group stated.

“We also wish to call on our youth in the 19 Northern states and FCT to be law abiding and not to resort to any reprisal attack as most of the information and videos being aired on social media, are not the true representation of the real situation in Abia and Rivers State.

“Our investigation has revealed that some of these videos are events of the past that have nothing to do with the current situation in the southern part of the country, and as such should be disregarded”.
The statement also commended Abia and Rivers state governors for their messages of peace and unity and for the protection of northerners residing in their respective states.

“We call on other governors within that region to emulate such gestures for the continuous peaceful coexistence of all Nigerians,” the group said.