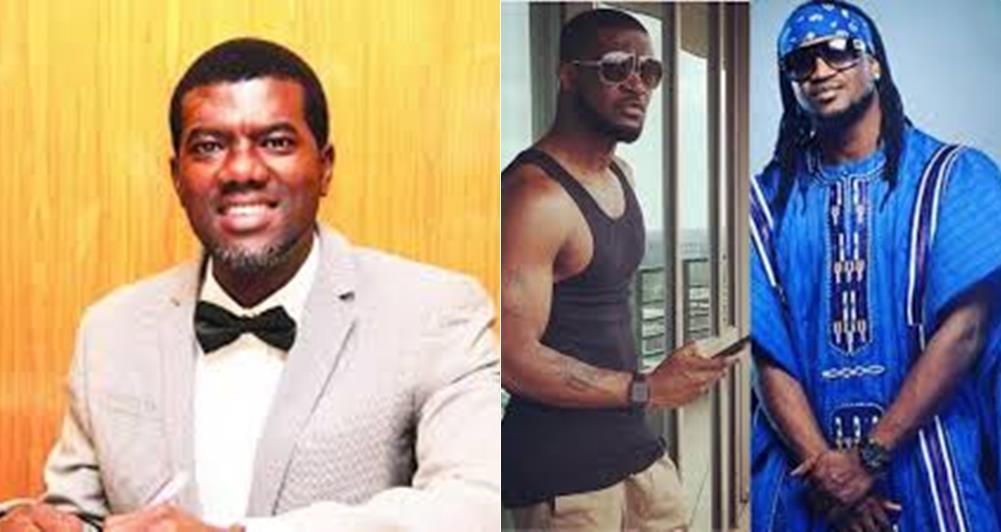 Read the article below;

Last week on this column, I had written about my experience in the beautiful island of The Seychelles and how Nigerian music, especially P-Square’s music, had conquered that island nation and enthralled her youths.

Little did I know when writing that piece titled, ‘How Nigeria Conquered The Seychelles’ that I would be devoting another column yet again to the Okoye brothers. But as they say, when it rains, it pours.

The twin brothers are again in the news, not for their collaboration with each other, but because of their confrontation with each other.
From what I gather, Peter wants the group to split up and go their separate ways, while Paul and their brother, Jude, have a slightly different agenda.
The disagreement culminated with a fight at the offices of the recently coronated Senior Advocate of Nigeria, Festus Keyamo. The fight which was ostensibly recorded by Peter, showed the trio (including Jude, their brother/manager), using gutter language that belied their status as international super stars.
The whole drama reminds me of a nursery rhyme I learnt as a child:

Why do P-Square remind me of this nursery rhyme? Because this is not the first time they will quarrel and if they do reconcile, it will also not be the first or the second reconciliation. They have flown away before and they have also come back again.

That is the reason why I am not so bothered with their family quarrel. You see, the Okoye brothers are first businessmen, before they are artistes. They are not in the entertainment industry. They are in show business, with particularly reference to the word ‘business’. To them, they are not entertaining their fans. They are providing them with a service that they are willing to pay for.
In short, as they say in America, it is all about the Benjamins!
I personally believe that when it is explained to the Okoye brothers what they stand to lose, they will adjust their attitudes faster than you can say Bank Alert!
What do I mean?
Let us learn from history.

The Beatles were once in a similar position as P-Square. And just like some suspect with Peter and Paul, it was women, (Yoko Ono for John Lennon and Linda McCartney) that came between them.
The women fed their individual man’s ego until he thought he was bigger than the group. Even though the Beatles were making hundreds of millions as the biggest group in the world, they allowed themselves to split over women on April 10, 1970.
But the rude awakening was to come when the individuals who made up The Beatles began making much less money as solo artistes than they made together.
As the renowned Nigerian award-winning international flutist, Tee Mac, has said on this matter, “There is a lot of power in togetherness”!

Having said that, I must say that there is a lot Nigeria as a nation can learn from P-Square.
I believe that it is not that the Okoye brothers want to split up as it is that they desire a more perfect union. Not a Union where Peter works and Paul chops or one where Paul has oil but it is Peter that has oil blocs.
P-Square – wants to restructure from unitary form of partnership to true federalism. You are Peter, I am Paul. Together, we are P-Square. Even if we part, we are still Okoyes. If Peter and Paul cannot live in peace, is it our own little Republics that will automatically lead to peace?

Perhaps restructuring is a better option than dismemberment. Perhaps God is using the drama taking place between P-Square to teach us a lesson on the options before Nigeria – division, restructuring or family fight.
Already we are seeing that the oil, that has made many in Nigeria insist on the status quo, is soon reaching the end of its shelf life.
Maybe no one has told us, but largely due to free oil money, our population has exploded at the fastest rate of increase the world has ever seen. And now we have almost 200 million people that we will not be able to cater for in five to ten years if we do not look for alternative sources of income.

If twin brothers like Peter and Paul can fight, let us not deceive ourselves that Nigerians love each other enough not to fight each other.
Our present leadership may not have the intellectual capacity to know that the various tensions in Nigeria are not really about religion or ethnicity as they are about an increasing number of people competing for a reducing quantity of resources.
As the British political economist, Reverend Thomas Robert Malthus, propounded in his 1798 book, An Essay on the Principle of Population, Nigeria is caught up in what is known in economics as the “Malthusian trap”.

The “Malthusian trap” is a phenomenon where a nation utilizes a sudden abundance for population growth rather than for maintaining a high standard of living, and when that abundance disappears, the population growth remains and becomes a problem to the nation because in the absence of the abundance that led to the population growth, the nation dissolves into conflict, skirmishes, crises and even war which happen naturally for the purpose of reducing that nation’s population to match with its post-abundance economic resources.
President Muhammadu Buhari may not know it, but what I have described above is what is currently happening in Nigeria.

Except the price of oil increases faster than the rise of Nigeria’s population, it is only a matter of when, not if, that there will be an implosion in Nigeria.
The only way to stop this coming implosion is if Nigeria restructured itself along the lines of true federalism and becomes a fiscal federation.
As long as we are assured of free oil money, we will keep on marrying and giving our daughters away in marriage and popping out babies without a care to how they will feed tomorrow.
But if we have to pay taxes to run our federal, state and local governments, we will cut our family size to match our pocket size.
Why is this so? Because as Reverend Malthus puts it, “The power of population is indefinitely greater than the power in the earth to produce subsistence for man”.
And Reverend Malthus did not come up with that idea out of thin air. Being a man of the cloth, like I, he got that idea from the Holy Bible.

Reverend Malthus was only reechoing the words of King Solomon (Nabi Suleiman in Islam), who said as follows in Ecclesiastes 5:11:
“When goods increase, they are increased that eat them: and what good is there to the owners thereof, saving the beholding of them with their eyes?”
Flowing from the above should we thus be surprised that the Okoye brothers’ fight restarted again after Paul announced in July that his wife had given birth to a set of twins?
More mouths to feed requires more resources which in itself puts a strain on the one required to provide the resources, whether in a family or in a nation.

Quote: Having said that, I must say that there is a lot Nigeria as a nation can learn from P-Square. I believe that it is not that the Okoye brothers want to split up as it is that they desire a more perfect union. Not a Union where Peter works and Paul chops or one where Paul has oil but it is Peter that has oil blocs. P-Square – wants to restructure from unitary form of partnership to true federalism. You are Peter, I am Paul. Together, we are P-Square. Even if we part, we are still Okoyes. If Peter and Paul cannot live in peace, is it our own little Republics that will automatically lead to peace? Perhaps restructuring is a better option than dismemberment