Home News Feed Pepper Seller Emerges As Best Graduating Student
Facebook
Twitter
WhatsApp
A brilliant Nigerian woman who graduated as best student from Redeemers University has shared the experience of what drove her to success. 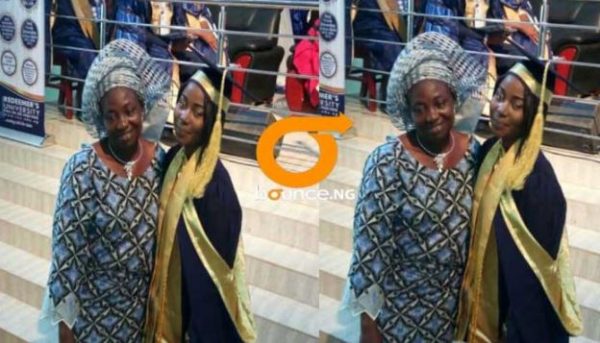 Hunger pushes several people over the edge. Some steal, others kill many destroy but Ifeoluwa’s hunger for success drove her along the long, dusty and narrow path to greatness.
“I, Bejide Ifeoluwa, the girl who sold plantain chips, who sold pepper and tomatoes, who sold fish, who swept the classrooms is now a graduate!”
With those words she received a resounding ovation from prominent Nigerians including former minister of defence – Theophilus Danjuma and the General Overseer of the Redeemed Church Worldwide, Pastor Enoch Adeboye.
Ifeoluwa finished with a Cumulative Grade Point Average of 4.93. If you ever went through the rigours to get a first class you would understand the long hours, the pain and self deprivation she had to endure consistently for 4 years.
What drove her?
According to Ifeoluwa, her story started at the first convocation of the same institution which she attended as a JSS 2 student in company of Professor L.B. kolawole who later challenged her saying, “it was a female like you who collected all those prizes, you too can do it.”
“In other to pay back a mother like this who has always been struggling for her children, I decided to not only be a first class student, but to be the best”, she said.
Speaking on the perceived limitation faced by most people from less privileged backgrounds, Ifeoluwa says God blesses those who dream and add hardwork to it.
“I always said to myself, I am not the first person to come from a less privileged home. If Daddy G.O (pastor E.A. Adeboye) could make it, why can’t I? If so many of the professors here who had poor backgrounds could make it, why should I not?”