Home News Feed Popular Pastor Arrested For Making ‘Outrageous Comments’ About Islam
Facebook
Twitter
WhatsApp
A popular pastor has been arrested by the government after he was found to have made certain outrageous comments about the Islamic religion. 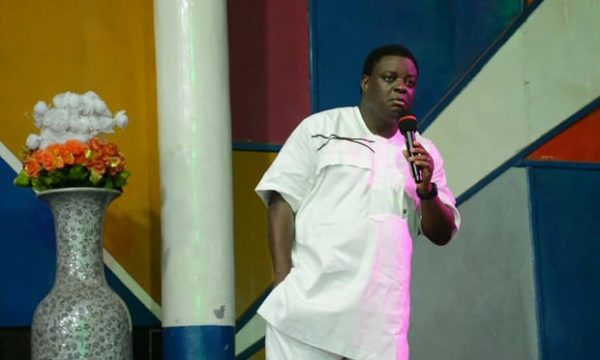 Victor Ajisafe, a popular Nigerian pastor has been arrested in Sierra Leone after recordings of a sermon targeting Muslims went viral on social media, sparking widespread outrage.
According to The Guardian UK, Victor Ajisafe, founder and leader of one of the country’s largest churches, in an address to his congregation on Saturday, called Islam a “violent religion of lies and deceit” and said Muslims have been responsible for “every terrorist act in the history of the world”.
Sierra Leone’s population is roughly 78% Muslim, according to a 2015 Pew Research Center estimate.
Audio and video recordings of the sermon appeared online within three days, and were met with immediate and near-universal condemnation by both Muslim and Christian Sierra Leoneans. Ajisafe was arrested on Tuesday, but has not yet been charged.
“Everyone is very upset by his message,” said MB Kamara, head of Sierra Leone’s criminal investigations department. “We are a very religiously tolerant country and no one ever worries whether someone is Muslim or Christian. We all have lived peacefully for generations, and no one wants that disrupted.”
An initial press release from the social welfare ministry said Ajisafe was being held for his own protection. Kamara said Ajisafe would be held until a charge against him could be determined.
Sierra Leone does not have legislation devoted specifically to hate speech, but incitement is prohibited under common law. The attorney general, Joseph Kamara, is expected to make a decision on Thursday.
All six branches of Ajisafe’s Sanctuary Praise Church, one of Sierra Leone’s largest Evangelical communities, have been indefinitely shut down by the social welfare ministry pending further investigations.
Police have been dispatched to each location to prevent anyone from entering after CID officials claimed that “credible information” indicated the existence of a plot to burn down the church’s Freetown headquarters.
Ibrahim Tommy, director of the civil society group Center for Accountability and the Rule of Law, said he was worried that banning people from Ajisafe’s church may constitute a violation of people’s right to free assembly.
“It’s completely wrong what he said, and in some ways even criminal,” Tommy said. “He should be held fully accountable, but I don’t think that the government should shut down a whole church and disband its congregation just because of one person. People have the right to worship where they please, and we’re venturing into dangerous territory by limiting that right, even temporarily.
“Besides, who says just because some hateful comments were said that suddenly every Muslim in the country is going to jump for an opportunity to destroy the man? By assuming so, the government is just reinforcing that stupid narrative about Muslims the pastor put out in the first place.”
Members of the Inter-Religious Council of Sierra Leone have condemned Ajisafe’s statements. The council’s secretary general, Reverend Dr Usman Jesse Fornah, said Sierra Leone’s Christians have lived “a peaceful coexistence with Muslims and want it to continue”. The organisation’s president, Sheikh Abu Bakarr Conteh, emphasised Islam’s peaceful nature and urged his followers to forgive Ajisafe and refrain from passing judgement on their Christian neighbours.
Ajisafe’s comments have been decried by Sierra Leoneans at home and abroad on social media. Some have demanded an apology, while others have called for the pastor’s deportation back to Nigeria.
“Statements like his can bring chaos to whole countries, so of course we’re concerned,” said Emmanuel Lansana, a lecturer in Freetown. “I come from a family of mixed religion. My father is a Muslim and my mother is a Christian. It’s the same with me and my wife, and we have happy homes. It’s as if [Ajisafe] wants to divide our country’s unique union at a time when the world needs us to lead by example. But I think he will be disappointed. We know how to love each other.”