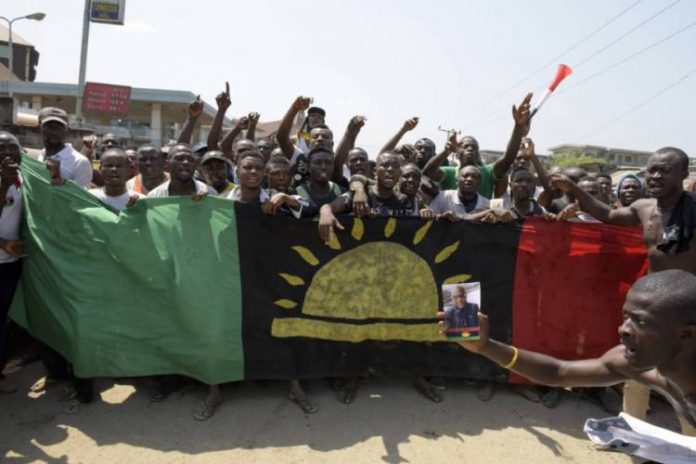 The Federal Government may have discovered more sources where funding of the operations of Nnamdi Kanu-led Indigenous People Biafra (IPOB), going by the revelation of a top Presidency official.

Minister of Information, Lai Mohammed, had last Wednesday, declared that the sources of funds for IPOB had been traced to France and the United Kingdom.

But Senior Special Assistant to the president on Diaspora Affairs, Honourable Abike Dabiri, who spoke with Sunday Tribune at the sideline of the ongoing 72nd Session of the United Nations General Assembly (UNGA) in New York, disclosed that foreign sources of funds for the secessionist group were more than the two already named by government.

According to her, it is now easier for government to trace the group’s sources of funds and block them, unlike before the government declared it as a terrorist organisation.

Dabiri noted that the declaration of the group as a terrorist organisation followed a meticulous investigation by the federal government.

She revealed that these sources had been known to the Federal Government for over a long period, adding that now that government had acted decisively by declaring IPOB a terrorist group, the funding countries had no choice but to cut off the support.

According to her, the issue was the focus of discussion between the Federal Government and Nigerians in the Diaspora during recent meeting in the United Kingdom.

She said: “These sources of funds have been known for a long time to have been coming from the Diaspora. But I think after proper investigation, Nigeria has always known that the issue has been from abroad, the funding was from abroad.

“But now, the Federal Government has finally nailed it. Knowing is the first line of success. So, now, it is tracing those funds and working with those countries.

“It was difficult before. Now that it is a terrorist organisation and you know its funding is coming from abroad, the next step is to block the sources of funding.

“We actually addressed this issue in London, because it was obvious that support was coming from abroad.

“In fact, Nigerians in the Diaspora spoke about this and they themselves started their investigation and research.

“So, now that Nigeria has been able to nail it, and you also know that this is a terrorist organisation, those countries where the funds are coming from need to support us in tackling this issue.”

Dabiri maintained that countries that are the sources of funds for IPOB may not have been aware of the questionable ventures they were utilised for.

Asked why such countries would be involved in IPOB’s funding, the presidential aide stated: “I wouldn’t know but now that they know, maybe they didn’t know. Now that they know, it is important for Nigeria to now talk to them.

“Two countries have been identified and I believe it is even much more than that. Now that they know, they need to work with Nigeria, to support us and stop another form of terrorism.”

On stopping individuals abroad who may be remitting money to the group, Dabiri said that was left for the financial institutions to tackle.

She further said: “I think the financial institutions know how to do it. It is easy to trace money and to know where it is going to.

“So, that will be left for the institutions to deal with. Once you know and you know where this is going to, I think it is easy to deal with.

“But now that it is official, the next step is to block the source of funding.”