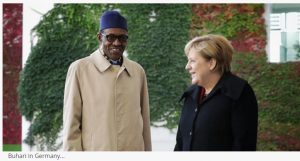 President Buhari felicitated with Merkel in a statement signed by his Special Adviser on Media and Publicity, Mr. Femi Adesina, in Abuja on Monday.

He also congratulated Merkel’s party for offering quality leadership to the European nation since the past two years, describing the victory as another opportunity to sustain the legacy of good work.

The president recalled his interactions with Merkel over the years, especially at the G8 meeting in 2015 and during his visit to Germany in 2016.

Buhari said he came out after each of the meetings with a strong impression of Merkel as a leader committed to building stronger ties across the world.

The Nigerian leader wished the German chancellor a successful tenure.

Merkel’s conservative Christian Union (UDU/CSU) bloc scored 32.9 percent of the votes cast at the election held on September 24, to clinch a record fourth term in office.

Political analysts say that Merkel’s party now has to build an uneasy coalition with its nearest rival, the Social Democrats and its candidate, Martin Schulz, coming a distant second with 20.8 percent of the votes.

They argue, however, that Merkel’s victory is clouded by the hard-right AfD party, winning its first seats in the German parliament.