Home News Feed Prophet Cries Out As Government Neglects His Family After Militants’ Shooting
Facebook
Twitter
WhatsApp
A Lagos prophet has cried out bitterly after the state government reportedly abandoned him after militants shot and killed his family. 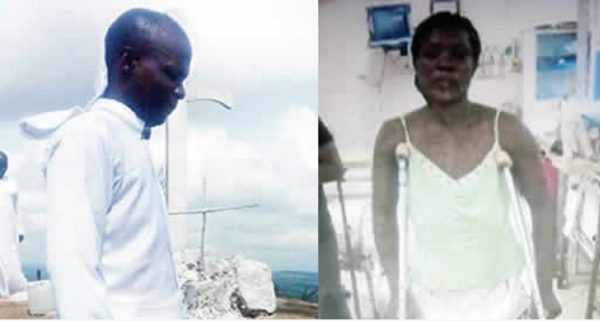 Babatunde Ojo, a prophet, has lamented the neglect of his family by the Lagos State Government after an attack by suspected militants in the Ikorodu area of the state led to the death of four policemen, an army captain, a chief security officer and a resident.
According to Punch Metro, Babatunde’s brother, Paul Olorunmaye, was among the dead, just as the cleric and his three-year-old daughter, Ewa, also sustained gunshot injuries.
The 37-year-old noted that he wouldn’t have bothered the government but for the increasing medical bill of his wife, Bukola, whose two legs were shattered by bullets during the attack.
Punch Metro had reported that suspected militants attacked Ishawo, Ikorodu, in April 2017, and while abducting some residents, the police and army operatives intervened.
During the ensuing shootout, four policemen from the Owutu Police Division and the army captain were killed.
Babatunde, who was in the police van conveying the rescued residents to safety, said the militants suddenly opened fire on the van, leading to the death of his brother, Olorunmaye, who were both in the van.
He said the 22-year-old was brought from their hometown in Omu-Ekiti, in the Oye council area of Ekiti State, in 2015 and was assisting his wife at her shop in Ikorodu before tragedy struck.
The cleric said while he (Babatunde) was hit by a bullet in the leg, his three-year-old daughter was shot in the buttocks, adding that his wife had her two legs shattered.
He said, “Those people (militants) could not be less than 400. They wore military camouflage and jackboots. They had some charms around their necks.
“Since the incident, we have been at the Lagos State University Teaching Hospital, Ikeja. Many thought all my family members were dead. We have buried my brother. My daughter, who was hit in the buttocks, survived miraculously. I have also recovered.
“But my wife’s condition is critical because she was hit in the two legs. Her right leg’s bone broke into two. She underwent an operation that cost about N500,000, aside money for drugs and other tests.”
Babatunde said his family was advised to seek government support, adding that efforts to get an audience with the state Governor, Akinwunmi Ambode, had been abortive.
He said the immediate family members of late Olorunmaye later called to say they heard that he had collected N5m from the government.
The cleric said the information prompted him to make enquiries, adding that he heard that government compensated some families who lost their members in the incident.
He appealed for government’s help, saying his wife had been scheduled for another operation which he could not afford.
“We have been discharged. But when we went for a checkup last Friday at the Orthopaedic Department of LASUTH, a doctor said the bullets had affected the bone on the right leg and an operation was needed to correct it. He said the operation would cost N250,000.
“We have spent close to N2m already. I have borrowed money from different people, including church members. We don’t even have a roof over our head because we have abandoned our house in fear. I am in anguish and my wife is in pain. Only urgent help will make a difference in our situation,” he said.
The mobile phone of the Lagos State Commissioner for Information and Strategy, Steve Ayorinde, rang out, and he had yet to respond to a text message on the incident as of the time of filing this report.