Home News Feed Retired Manchester United Footballer Launches Professional Boxing Career
Facebook
Twitter
WhatsApp
The former England and Manchester United star, Rio Ferdinand, plans to announce on Tuesday that he will attempt to become a professional boxer.
https://twitter.com/rioferdy5/status/910034795937320960?ref_src=twsrc%5Etfw&ref_url=http%3A%2F%2Fwww.tori.ng%2Fnews%2F74161%2Fretired-footballer-rio-ferdinand-launches-professi.html
Rio Ferdinand is launching a new career as a professional boxer, two years after he retired from football.
The 38-year-old’s move into the ring is being backed by betting company Betfair, which announced the news on Tuesday.
Former Manchester United and England defender Ferdinand works as a TV pundit and he has his own clothing line.
“I’m doing this because it’s a challenge,” he said. “I’ve won titles and now I’m aiming for a belt.”
He has posted several social media videos in recent months showing him boxing and working with personal trainer Mel Deane.
Ferdinand, who won the Premier League six times and the Champions League once during his time in Manchester, may follow in the footsteps of former Birmingham City midfielder, Curtis Woodhouse and former Crystal Palace forward, Leon McKenzie, who became professional boxers after quitting football. Woodhouse became British super-lightweight champion.
It was Betfair who approached Ferdinand about making the switch, and the betting company will help him qualify for his British Boxing Board of Control licence before he begins training and competing.
The company previously backed Victoria Pendleton in her transition from Olympic cyclist to Cheltenham jockey.
“When Betfair approached me about the challenge, the chance to prove myself in a new sport was a real draw,”added Ferdinand. 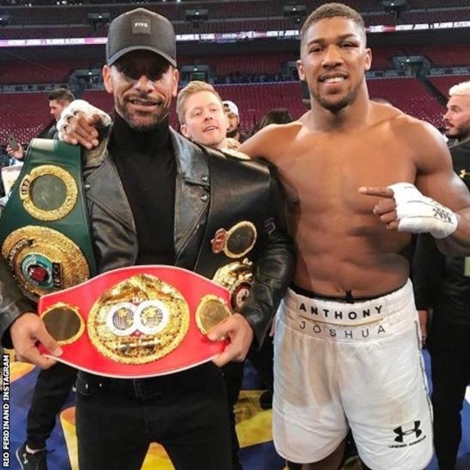 He will be coached by Team GB coach and former WBC super-middleweight champion, Richie Woodhall.
“In all honesty, I think Rio can definitely box as a professional given time. He has natural power in his right hand, is extremely fit and is very enthusiastic to learn which is encouraging,” said Woodhall.
“Style wise, he’s very raw and I’ll have to develop this which will take time but he has all the natural ingredients, height and reach advantages over boxers in his weight division and definitely has potential to win a title in the future.”
The former centre-back started his career with West Ham and also played for Leeds and QPR, making more than 500 career club appearances. He was capped 81 times for England.
Woodhouse told BBC Radio 5 live he was “shocked” to hear of Ferdinand’s career change.
“When it came up on my Twitter feed that Rio Ferdinand was going to become a professional boxer I thought I’d been hacked,” he said. “It’s not something you read every day is it?
“I’ve been retired three years myself and one thing I missed – and he’s probably going through himself at the minute – is the competitiveness of being an athlete.
“Once that’s taken away from you it’s very, very difficult to replace it, so that’s probably what he’s chasing – to get that competitiveness back in his life.”