We don’t think much about the thyroid… and we really should.

Especially considering that this non-descript little gland located in your neck produces hormones that regulate energy metabolism, control protein synthesis and adjust your body’s sensitivity to other hormones.

With all these critical functions, it makes sense your thyroid should get more attention — and care. But, unfortunately, problems seem to be on the rise…

According to the American Thyroid Association, nearly 60 million Americans, mostly women, have some type of thyroid problem. As a result, they may experience anxiety, achiness, weakness, unexplained weight fluctuations and other issues. As you can see, these symptoms are mostly non-specific. They could be caused by any number of conditions, or simply be a part of normal life. However, it’s important to be alert to thyroid problems, which can increase the risk for heart disease, infertility, depression and other serious conditions.

What can go wrong
Thyroid conditions fall into three categories: hypothyroidism, hyperthyroidism and autoimmune disorders. The most common form is hypothyroidism, an underactive thyroid, which can lead to weight gain, fatigue and an excessively slow heart rate. Hyperthyroidism is the opposite, an overactive thyroid. However, the gland can’t maintain that pace and burns out over time, leading us back to hypothyroidism. As you can guess, mood swings can be a big part of this condition. Autoimmune disorders, such as Hashimoto’s thyroiditis, can have a similar effect to hyperthyroidism—over activity followed by under activity.

Why all the thyroid problems?
Think about what a thyroid does—it regulates metabolism. Now, think of all the demands we make on our metabolism. Our lifestyles are so frenetic, we hardly ever stop. On a comparative level, this is especially true for young women, who are balancing job, family and other interests. As a result, we are seeing a lot of hypothyroidism in women under 40. Too many demands are made and the gland simply burns out.

So the first step in rejuvenating the thyroid is simply slowing down. This isn’t just good for the thyroid. Consider what’s going on with your brain, cardiovascular system, immunity. Give yourself the gift of being at rest.

Toxins out
Toxins also threaten the thyroid, which is particularly sensitive to pesticides and heavy metals. So removing pesticides, mercury, lead, cadmium, arsenic and other toxins should definitely be part of your health regiment

You may have heard of iodine’s role in thyroid health. Iodine is both an ingredient in thyroid hormones and a detoxifier. Actually, the first role leads to the second one. The thyroid takes up iodine, replacing toxins like bromide, which is common in pesticides. Be careful though, too much iodine can also be an issue. Two to three milligrams a day should do it. For people who are extremely deficient, I recommend 12.5 milligrams. More than that is probably too much. It’s also best to avoid iodine if you have Hashimoto’s or hyperthyroidism, as it can make the thyroid overactive.

Support a healthy thyroid
There are a variety of minerals that contribute to thyroid health. I particularly recommend magnesium, calcium, zinc and selenium. Certain botanicals can be helpful as well. Because many thyroid conditions are associated with inflammation, cooling herbs are recommended.

Some that can be particularly helpful are self heal (Prunella vulgaris), Chinese figwort (Radix scrophulariae ningpoenis), bugle weed (in small amounts) and lemon balm.

In addition, it’s helpful to avoid soy, which can interfere with thyroid enzymes. In particular, avoid raw soy products. Fermented soy is less of a concern.

One of the main culprits in thyroid and other conditions is a protein called galectin-3, which is often associated with inflammation. Galectin-3 is an important protein, but sometimes gets overproduced and needs to be cleared from the body. Controlling galectin-3 will do more than bolster thyroid health; the protein has been associated with cancer, heart disease, kidney ailments and other conditions. In fact, the Food and Drug Administration has approved a galectin-3 test for cardiovascular disease.

One of the best ways to remove the harmful effects caused by galectin-3 is modified citrus pectin (MCP). Multiple studies have shown that MCP reduces galectin-3 levels throughout the body. MCP also binds to and removes heavy metals and other toxins, which is especially useful for thyroid health.

If you think you might have a thyroid issue, see your doctor as soon as possible. However, it’s important to note that the diagnostic test for low thyroid is not always accurate. The thyroid may be producing enough hormones, but the body is somehow canceling them out. The issue may be toxins, so detoxification becomes even more important. Ultimately, this is a great solution, as we could always use a little more detoxification, and many of the methods we use to support thyroid health enhance overall health as well. 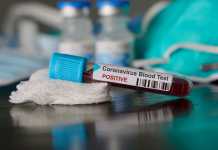