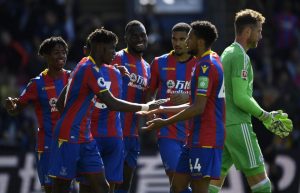 Roy Hodgson secured his first victory as Crystal Palace manager as they beat Premier League rivals Huddersfield in the third round of the Carabao Cup.

Bakary Sako scored the only goal of the game – Hodgson’s second in charge of the Eagles – with a first-half header.

Defender Pape Souare came on to make his first appearance for the Eagles since breaking his thighbone and jaw in a horrific car crash last September.

Huddersfield had chances to equalise in the second half but Palace held on.

Florent Hadergjonaj, who made his first start for Huddersfield at right-back, created a chance for Elias Kachunga, and Tom Ince also had a shot saved shortly before half-time.

Palace held firm, however, thanks largely to centre-back Mamadou Sakho, making his first start since joining the club on a permanent basis on transfer deadline day.

According to the BBC, the victory signifies progression from Palace, who were beaten 3-0 by the same opponents on the opening day of the season.

But Hodgson’s biggest test remains in the Premier League, where Palace are yet to score a goal or secure a point.

Predecessor Frank de Boer’s only victory in his five games as manager came against Ipswich in the previous round of this competition.