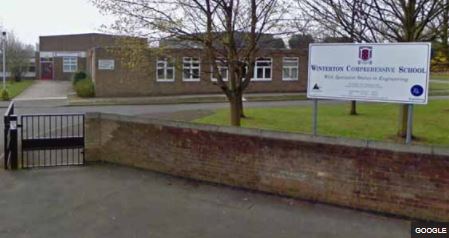 According to Daily Star UK report, a 16-year-old has been arrested on suspicion of attempted murder after a 61-year-old woman was stabbed at Winterton Community Academy in Scunthorpe, UK.
The woman is a welfare officer at the school and sustained non-life threatening injuries.
The young girl has been arrested on suspicion of attempted murder and is currently being questioned by officers.
Parents of pupils at Winterton Community Academy received a text message from the school to say an incident had taken place.
Chief Superintendent Christine Wilson said: “”We attended a serious incident just before 9am this morning at Winterton Community Academy, and a 61-year-old woman is being treated in hospital for serious but not life threatening injuries.
“Staff at the school and police officers responded to this isolated incident very quickly, and one person is currently in custody as a result.
“There was no disruption to any other children, none of whom witnessed the incident. Children at the school have not been directly affected by this.”
Local reports say the school is on lockdown.
But headteacher Gareth Morris reassured parents and the public in the area.
He said: “We are keen to reassure parents and the community that this is an isolated incident and that the school remains open.
“We will support our staff directly affected and will be keeping parents updated throughout the day.”