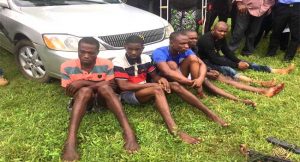 Operatives of the Imo State Police Command  has arrested a police officer who allegedly masterminded the abduction and murder of a Catholic Priest, Rev. Cyriacus Onunkwo, recently.

The Commissioner of Police in the state, Mr Chris Ezike, said five other suspects had also been arrested in connection with the crime.

Ezike disclosed this in Owerri while presenting the suspects to newsmen on Thursday.

He said following a directive by the Inspector-General of Police, Mr Ibrahim Idris, to track down the culprits, the command moved into action and had so far arrested six persons in connection with the crime.

He said the command was able to achieve the feat through a whistle blowing strategy and forensic technology.

Rev. Onunkwo was abducted on Friday at Banana junction in Orlu Local Government Area of Imo by gunmen.

His corpse was later found in Omuma the following day.

One of the suspects , Mr Izuchukwu Okafor from Anambra, told the News Agency of Nigeria (NAN) that Onunkwo was killed in error.

He claimed that the gang only kidnapped the priest for ransom but later discovered that he died while on transit to their hideout.

“When we kidnapped the priest, we used cello tape to seal his mouth, unknown to us, his nose was also sealed.

“When we discovered that he could no longer talk, we unsealed his mouth and found out that he has died,” Okafor said.

Another suspect, Mr Onyema Cyril, from Onuimo Local Government Area of Imo, said that when they discovered that their victim was a priest he opted for his release, but that the police officer who was among them threatened to shoot them if they released him.

Among those presented to newsmen in connection with the crime are: Izuchukwu Okafor, Onyema Cyril, Emmanuel Ozuigbo, Victor Ikechukwu, Ifeanyi Nwosu and Corporal Jude Madu.