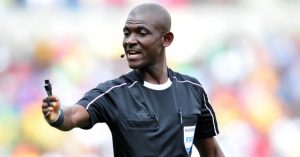 The South Africa Football Association has said it will accept the decision that the World Cup qualifier against Senegal should be replayed after referee Joseph Lamptey’s lifetime ban was upheld by the Court of Arbitration for Sport, Skysports reports.

Lamptey has been expelled by FIFA over match-fixing allegations, and the world governing body announced the match must be replayed after the decision from CAS last week.

SAFA did not immediately accept FIFA’s decision for it to be replayed but have now changed course.

A statement on Tuesday said, “Following additional information SAFA received from world governing body FIFA, the Association resolved on moral and ethical grounds that we cannot be beneficiaries of corrupt activities.

“Therefore, we have decided that we will comply with the FIFA directive to replay the match against Senegal at a date to be decided.”

However, SAFA reserved the right to alter its decision if there were further developments in the case.

“We have however, noted that the official at the centre of all this controversy has appealed his case to the courts of law and if the courts overturn the decision, everything becomes null and void and SAFA will reserve its right to challenge the decision of FIFA to replay the match,” the statement added.

“During SAFA Emergency Committee meeting on Monday, there were two positions on the matter – whether to go the legal route since there are lots of unanswered questions from FIFA or the ethical and moral route.

“SAFA’s zero tolerance on corrupt activities within football are well documented and it is in this light that we decided to comply with the FIFA directive.”