Home News Feed Special Ways We Use In Attracting Passengers – Lagos Female Taxi Driver...
Facebook
Twitter
WhatsApp
In a male-dominated transportation business industry, how do female taxi drivers cope especially with the hardship in the economy? The hardworking ladies who ply their trade by driving, share their stories. 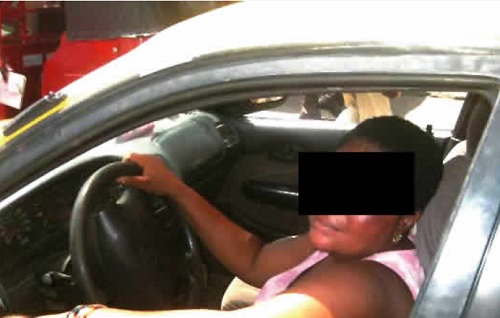 Smartly pulling over her Toyota Sienna space bus at a corner of the busy road with the type of precision capable of leaving even the most experienced of drivers drooling with envy that morning, Ronke Opemipo betrayed her tender and beautiful feminine attributes. Beaming with smiles as she exchanged pleasantries with familiar faces around the area, the 35-year-old lady has settled very well into her new terrain since first hitting the place about six months ago.
One of a growing number of female taxi drivers now plying the Ikeja-under-bridge to Shoprite-Alausa-Express route in Lagos, ferrying dozens of passengers daily, Opemipo, through diligence and hard work, has wormed herself into the hearts of many in the capital. Every morning, from as early as 7:00am, the Ondo native hits the axis all the way from Iyana-Ipaja, a densely populated part of the metropolis, where she resides. Moving seven passengers at a time between both ends of her usual route, the single mother endures several energy-sapping hours in traffic, retiring home at about 5:00pm in preparation for another day of work.
“The job is not for lazy people,” Opemipo said as our correspondent struck a friendly chat with her. “Being a single mother, it is more difficult because I have to wake up very early each morning to prepare my daughter for school before setting out for the day’s business. It has not been easy but I am coping through the mercies of God,” she added, before flashing a warm smile.
A former staff at an insurance firm in the Surulere area of Lagos, the 35-year-old’s journey into the business of taxi driving began early this year after being shown the exit door by her employers last October – at the height of the worst economic recession to hit the country in nearly over two decades. Working more than four years with the company and contributing significantly to its growth through the types of clients she brought in, Opemipo and over 200 others were laid off by the organisation across the country immediately the economy nosedived, affecting everything all around it. After searching for a suitable job for several months without luck, a neighbour mooted an idea to her. Six months after, she is happy to have heeded the call.
“Being laid off all of a sudden by an organisation you’ve worked very hard for could be very painful,” she said.“Throughout my time with the insurance firm, I put in my best to ensure that I meet set targets but immediately the economy became rough, all of those did not matter again. We were shown the door. 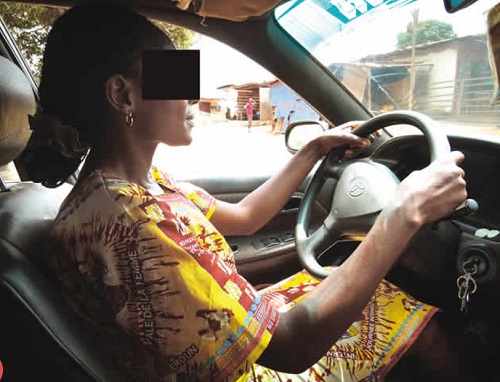 “So after spending weeks and in fact months looking for a job that befits my status and also thinking of what business to go into, a neighbour encouraged me to go into private taxi business since I had a good vehicle. He told me that rather than remaining at home doing nothing at the time, I could make some good money for myself by going into the vocation. It sounded so awkward at first but after some time, I decided to give it a try after speaking with a few friends, who told me that they knew women driving taxis and that they were making some good money from it.
“I was very nervous and shy at the beginning but after seeing the ease with which other ladies in the vocation carried out their duties, I felt more confident of myself and got used to the job as time progressed. It has not been easy operating in this axis especially with all the traffic and agberos around; over time I have been able to understand everything about taxi business. I have had no reason to regret my decision so far,” she said.
In a job dominated by men, making a way in one of Lagos’ most ‘chaotic’ bus stops and transport routes has not been easy. But like most female taxi drivers, who ply the axis, Opemipo has found new and interesting ways to win passengers to herself and ensure the bucks keep rolling in. Revealing some of the strategies she adopts to remain popular among passengers in this part of the city, she said that being distinct is the secret of her success so far in the business.
“Even though I am a woman and would naturally get some form of sympathy from commuters, I make sure I dress well all the time because appearance goes a long way too in any business.
“Also, I ensure that my vehicle, both inside and outside is very neat whenever I am on the road. As a result of this, a lot of passengers would even prefer to wait for my turn to load because they like the way I operate.
“Apart from the little stress associated with driving in traffic, it has not been a bad experience for me because there is no day that I take my car out that I don’t go back home with at least N10, 000. I work only on weekdays so that I can have enough time for myself and my daughter. I love the job because it allows me to be in control of my time,” she said. 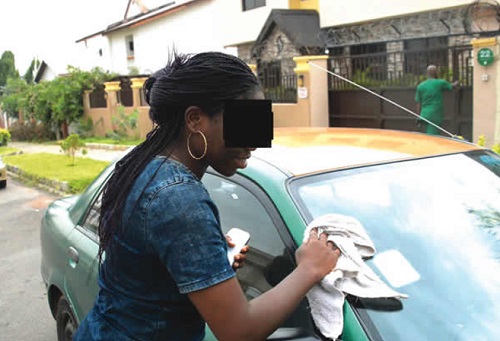